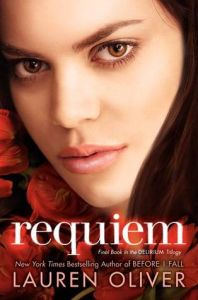 Now an active member of the resistance, Lena has transformed. The nascent rebellion that was underway in Pandemonium has ignited into an all-out revolution in Requiem, and Lena is at the center of the fight. After rescuing Julian from a death sentence, Lena and her friends fled to the Wilds. But the Wilds are no longer a safe haven. Pockets of rebellion have opened throughout the country, and the government cannot deny the existence of Invalids. Regulators infiltrate the borderlands to stamp out the rebels.

As Lena navigates the increasingly dangerous terrain of the Wilds, her best friend, Hana, lives a safe, loveless life in Portland as the fiancée of the young mayor. Requiem is told from both Lena and Hana's points of view. They live side by side in a world that divides them until, at last, their stories converge.

I have such mixed opinions on this last book in the Delirium series.  I have enjoyed the series, but the pacing and story in this one seemed to stall a little bit.  And the ending… I just don’t know how I feel about it!

I liked the back and forth POVs between Lena and Hana.  Hana’s character is so different now, almost a faded version of herself.  The foundation is still there and there are still sparks of the Hana that we met in Delirium but the “cure” has dampened those parts of her that made her who she was.  Yet another moment that makes you question just how much of a price is worth paying for a supposedly stable society.  We also learn some secrets about Hana, things I had suspected but now we know for sure.  That certainly added a twist to her character.  Lena has struggles of her own and the changes her character has undergone between the first and this last book are pretty amazing.  She is no longer the meek girl she once was.

However, there were times when it felt like this was more Hana’s story than Lena’s.  It often seemed as if Lena’s story just wasn’t progressing very much.  The dynamic between her and her relationships just seemed off, with neither of her love interests really pushing forward too much.  There was just no real resolution there and I wish their had been.

The ending…  I felt like it was too open-ended, too many questions left unanswered about the world, about Lena, about her mother, about Alex, about Julian.  This was the last book and I feel like it ended with as many open questions as it started.

As a standalone, I don’t know that I would necessarily recommend this book.  But if you have read the series, it is definitely a must read to get some resolution.