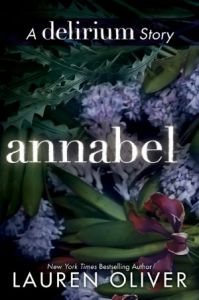 Lena's mother, Annabel, has always been a mystery—a ghost in Lena's past. Until now.

Lena Halloway's mother, Annabel, supposedly committed suicide when Lena was only six years old. That's the lie that Lena grew up believing, but the truth is very different. As a rebellious teenager, Annabel ran away from home and straight into the man she knew she was destined to marry. The world was different then—the regulations not as stringent, the cure only a decade old. Fast forward to the present, and Annabel is consigned to a dirty prison cell, where she nurtures her hope of escape and scratches one word over and over into the walls: Love.

But Annabel, like Lena, is a fighter. Through chapters that alternate between her past and present, Annabel reveals the story behind her failed cures, her marriage, the births of her children, her imprisonment, and, ultimately, her daring escape.

Annabel is the story of Lena’s mother and it really gives readers of the series a little bit of insight to her.  It starts years before Lena was born and shares Annabel’s experience with the cure and her time in the crypts.  Annabel grew up as society was changing and she rebelled against it, eventually meeting the man who would become the love of her life, even if he would never be able to love her.  It was interesting to get to know Annabel as more than a distant figure in Lena’s life, although I wish it had been a bit longer so we could have learned more about her time following her escape from the crypts.

While you can definitely read the trilogy withou this, I think it offers some depth and understanding that makes the overall story even better.