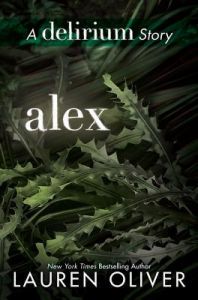 When Alex sacrificed himself to save Lena, he thought he was committing himself to certain death, but what he got was almost worse. Imprisoned and tortured by the guards, his mind forces him to relive a past he would rather forget. But in the dark he grows stronger. Both hopeful and terrified, he fights to find his way back to her and the love he still clings to.

In this digital story that will appeal to fans of Delirium and welcome new admirers to its world, readers will learn of Alex's time after the events of Delirium, as well as the dark past that he has tried to forget.

Alex is the last of the Delirium novellas, letting us get to know Alex through his own eyes instead of through Lena’s.  Most of it told of his time in the crypts and then his escape.  It was interesting to see his character change during his time away, but it made me even less sure which guy I wanted to “win” in the end.  I liked Alex in Delirium, but I didn’t love him.  I liked Julian, too, but I didn’t love him either.  Alex changed so much in this novella that he is almost a different person and even though I read this after Requiem, I am still not sure how I feel!

Like most of the other novellas, this isn’t entirely necessary to enjoy the main trilogy, but the depth it adds is a good addition.