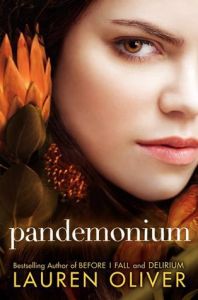 I loved Delirium and I loved Pandemonium just as much, if not more!  I enjoyed the “now and then” structure of it.  It gave us backstory a bit at a time and let the story of the now keep moving forward and that was an interesting mix.

Everything about Lena’s life has turned on edge since she escaped to the Wilds.  Her character arc is great as she struggles to adapt to  her new world.  Life there is so different from everything that she has known before and change is necessary.  She becomes strong, physically and mentally, and creates family out of strangers.  I love how real the characters are.  Some of those in the Wilds have spent most of their lives there.  They are fully adapted to the ways and customs of living in a world of survival and chaos.  But there are the others that spent much of their lives in the valid cities.  No matter what their reasons for escaping into the Wilds may have been, no matter what it was that they were fleeing, it is clear that it is hard to get past the teachings of the valid cities.  Those teachings linger even as they form new families and new societies.

The romance factor for Lena takes a new turn and, even now that I have finished, I am still not sure how I feel about it.  But there was so much sweetness and humanity about it and that I loved.

There was a lot more action in this book, and I loved it.  More than in Delirium, you could really get a sense of the dangers of the Wilds and living in the ways that these people must.  It was fascinating!

I love this series and this is a great installment in the series.