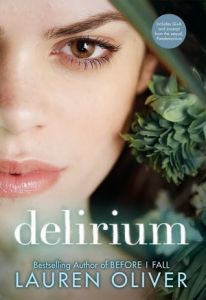 Ninety-five days, and then I'll be safe. I wonder whether the procedure will hurt. I want to get it over with. It's hard to be patient. It's hard not to be afraid while I'm still uncured, though so far the deliria hasn't touched me yet. Still, I worry. They say that in the old days, love drove people to madness. The deadliest of all deadly things: It kills you both when you have it and when you don't.

Why did I wait so long to start reading this amazing series?!  I love the premise of this story, that love is not only the root of all that is wrong with the world, but a disease in and of itself.  The implications are terrifying, the thought processes and sheer control of the government in their attempt to subdue basic human emotions in the name of social order.

I love, love, love dystopian fiction.  Every dystopia is the result of an attempt at Utopia, an attempt that goes horribly wrong.  It is chilling to see different aspects of our own world seen in a different way, seen by the new society as the root of all problems.  These novels make you think, make you question your values, your beliefs, your priorites.   They make you ask what price you are willing to pay for a “better” world?  And is what you’re striving for really what you want?

In this one, it is love that is the root of all that is wrong with the world, a basic human emotion that is wiped out in the name of peaceful society, with often horrific results.  It is interesting that this is a society based on social order and science, and yet so much of what is done to the citizens is barbaric.  Every aspect of life is controlled.  Every social norm, every law… all in place because of the views on the destructive nature of love.  It is terrifying.

Lena is a fantastic heroine, spending her life believing in the society’s views on love and life.  She yearns for her turn to be cured, wanting nothing more than to be assured of her safety and future.  Her best friend Hana is the wild child, flying in the face of the rules.  Lena’s transformation is slow, caught between her fear of deliria and the overwhelming feeling that there just might be something more.  But she isn’t Hana.  She is a bit timid, and has her own baggage to add to her fear.  But then she meets Alex and he opens her eyes to the world she lives in.  Everything she thought she knew about her life, her past, and her future flips and nothing will ever be the same for her again.

The ending.  Oh, the ending.  I am still having a hard time dealing with it and I am almost done with the second book as I am writing this.  And that is all I am going to say about that!

This is a fantastic dystopian read, with a chilling premise!