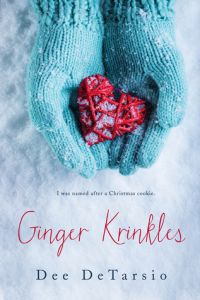 Ginger Krinkles is crossing her fingers that this holiday season will be extra special, for once. She lost her job in San Diego and dreads moving back home to Ennui, Ohio, where she’s convinced she will end up like her mean ol’ grandmother (God rest her soul). Ginger has always been a holiday-hater. But she has a secret. Make that two. If you buy the first one, maybe it will be easier to unwrap the second: either Ginger is an elf, or there really is magic to be found in an old cookie recipe.

Ginger Krinkles was at times hilarious and at other times sad, but all in all, I liked it a whole lot more than I thought I was going to.

Ginger Krinkles is the star of this book, a snarky holiday-hater that, at first, drove me nuts.  In the beginning, she came off as a bit of a shallow, rhymes-with-witch.  But as the book unfolds and you get to know her, it is easy to understand why she is the way she is.  She’s just a smart, frustrated, snarky kind of girl who has plenty of reasons to be annoyed by the holiday season.  And then I began to love her.

The book is short, but it is full of story.  There a lot of humor and quick wit, some of which is pretty twisted, even dark.  Thusly… right up my alley!  There are some moments where we see her as flawed as she is, moments when her big mouth and her bad attitude get her in trouble with her friends, her career, her family, and her relationships.  But those things make her vulnerable and I love that.

And Joe.  Oh, Joe.  Kind of a book boyfriend for me.  Tolerant and patient, but unwilling to take crap.  And a military man to boot.  That pretty much tied him up in a pretty red bow for me.

This a book with heart, with humor, imperfect characters, and even a bit of sadness.  But all of those things are exactly what makes it a great holiday read!

DEE DeTARSIO is a TV writer living in southern California. After growing up in Ennui, Ohio, and graduating from The Ohio State University she vowed never to be cold again (in a tantrum more worthy of Suellen than Scarlett) and ended up in Tucson, Arizona, producing the news for the CBS affiliate, oddly enough called KOLD-TV. She moved to San Diego where she worked in the SeaWorld entertainment department as a producer/writer. (Penguins are mean!) She then became a producer/writer for the NBC affiliate.

Dee is the author of hopefully-ever-after novels: ALL MY RESTLESS LIFE TO LIVE (Winner, 2014 National Indie Excellence Awards), HAOLE WOOD (Winner, San Diego Book Awards, and Finalist in Next Generation Indie Book Awards), THE SCENT OF JADE, THE KITCHEN SHRINK (both finalists in The San Diego Book and Writing Awards), ‘TIL SOMEBODY LOVES YOU, and ROS, (Kindle Bestseller).

Though her mother never beat her (that hard) and her father is not a celebrity, she suspects one of her four sisters is a vampire.

(She only goes back to visit Ohio for two days in early October because she is equally petrified of tornadoes and getting trapped in a snowstorm.)

One response to “Ginger Krinkles”