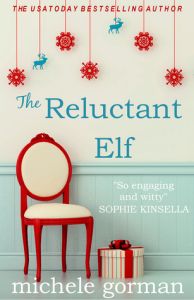 Single mother and extremely undomestic goddess, Lottie, has five days to become the ultimate B&B hostess to save her beloved Aunt Kate’s livelihood.

When Aunt Kate ends up in the hospital, Lottie and her seven-year-old daughter are called to rural Wales to stand in at the B&B. Without the faintest idea how to run a hotel (she can barely run her own life), Lottie must impress the picky hotel reviewer and his dysfunctional family who are coming to stay over Christmas. Without the rating only he can bestow, Aunt Kate will lose her livelihood.

But will Danny, the local taxi driver who she hires to help her, really be Santa’s little helper, or the Grinch who stole Christmas?

I was looking for a short Christmas read with a good plot and this was it, yet I still had some mixed reactions.

Lottie definitely earns the title “Britain’s Worst Innkeeper,” although I don’t think that Aunt Kate would have won any awards in that area either.  When Aunt Kate is in an accident, Lottie and her daughter Mable head to Wales for the holidays a few days early.  When they get there, they discover that Kate is down for the count AND expecting important guests over the holidays.  And if those guests aren’t satisfied, it could mean the end of Kate’s career.  So Lottie and Mabel step in with help of an unepected ally to “save” the day.

I love the premise, however formulaic it might be, of a bad situation that must be overcome.  And Lottie and Mabel definitely walked into a mess.  It was a mess so awful that it actually made me sad rather than feel for Lottie’s dilemma.  It was the kind of mess that made you wonder about the mental state of poor Aunt Kate.  I think it was that situation that gave me pause, gave me mixed feelings about Lottie.  The complete lack of connection between reality and Kate was never really addressed.  Now I know that this is supposed to be a heartwarming, holiday story, which it was, but that seemed like a glaring issue to not address.

Mabel was adorable and funny as anything and I loved her!  Lottie, too, was funny, although I thought she was a bit too tempermental with Danny at times and not enough with some of her guests.  Danny was a great guy and I thought he was a fantastic romantic hero.

This is a short read, but a good one to get you in the holiday mood!

I write romantic comedy, including SINGLE IN THE CITY (the first in The Expat Diaries series) and BELLA SUMMER TAKES A CHANCE. Born and raised in the US, I lost my heart to London 16 years ago, where I’ve lived ever since. I’ve also turned my hand to upmarket commercial fiction under the pen name Jamie Scott.