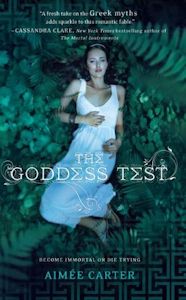 Every girl who had taken the test has died.

It's always been just Kate and her mom—and her mother is dying. Her last wish? To move back to her childhood home. So Kate's going to start at a new school with no friends, no other family and the fear her mother won't live past the fall.

Then she meets Henry. Dark. Tortured. And mesmerizing. He claims to be Hades, god of the Underworld—and if she accepts his bargain, he'll keep her mother alive while Kate tries to pass seven tests.

Kate is sure he's crazy—until she sees him bring a girl back from the dead. Now saving her mother seems crazily possible. If she succeeds, she'll become Henry's future bride, and a goddess.

I have always loved Greek mythology and I love retellings and reimaginings of fairy tales and legends.  I got both in The Goddess Test, which makes me a very happy reader!

The characters in this story were wonderful!  I love that Kate is created to be strong and independent, her own person.  She has had to be strong not only for herself, but for her mother, too, who is slowly dying from cancer.  It has always been Kate and her mother against the world and the thought of her inevitable future without her mother terrifies her.  Henry, too, has his own story of suffering.  He has been badly burned in love, tortured to the point that he sees no true future for himself.  His immortality and the thought of a lifetime of feeling lost is overwhelming to him.  His transformation is one of the shining points in the book, watching his character change and grow.  Kate also meets James in her new high school, whom I loved.  He was funny, open, sincere… just the kind of guy I would be attracted to!  Kate also meets Ava, the typical high school Mean Girl who takes an instant dislike to Kate.  Ava figures prominently in this book (in ways I can’t reveal!) but she was one of my favorite characters throughout the book.

The Goddess Test tells the story of Kate and Henry and Kate’s quest to pass the Tests.  But there is much more to it.  It is also the story of loss, love, and acceptance.  The story line between mother and daughter was extremely emotional and, although it was bittersweet, it was one of my favorite parts of the book.

I loved the premise of this book, the Tests.  In most mythology, the questing hero is male.  So it was refreshing to have our questor be female.  She accepts Henry’s deal, knowing that no one has ever passed all seven tests.  But for Kate, it is worth trying just for a chance at a little more time with her mother.

There are a lot of twists and turns with these tests, coming in unexpected ways and places.  There are a number of clues throughout the book about the gods and goddesses, as well as the nature of the twists.  Some of them are easy to identify, while others keep you guessing until the end!

Purists might not enjoy some of the changes to the traditional stories and representations of Greek mythology.  But these kinds of changes are appropriate to the story, not to mention the YA demographic.  And those kinds of changes are exactly why I love retellings/reimaginings… fresh, new looks at established characters and stories.  I felt that, while some things have changed, the essence of who these gods and goddesses were in traditional mythology was maintained.

Keep trying until you have no more chances left.

Sometimes we misjudge what is possible and what is not.

Whatever obstacles you face, remember you can get through anything if you want to badly enough.

No matter what happens, I will always be there for you, even if you do not remember who I am.

But if this works-if I pass, I need to know that when you look at me, you’re going to see me, not just her replacement. That there is more in this future for me than standing in the shadows while you wallow the rest of your existence away.

The afterlife is whatever a soul wishes or believes it to be.

I truly enjoyed this book!  I love that the romance in it was one of mutual respect and not overly swoony, gushy love.  The retelling/reimagining of traditional mythology was fantastic!  I highly recommend this read for lovers of retellings and of Greek mythology!

« If I Tell
The Goddess Hunt »