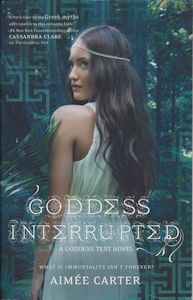 Kate Winters has won immortality. But if she wants a life with Henry in the Underworld, she'll have to fight for it.

Becoming immortal wasn't supposed to be the easy part. Though Kate is about to be crowned Queen of the Underworld, she's as isolated as ever. And despite her growing love for Henry, ruler of the Underworld, he's becoming ever more distant and secretive. Then, in the midst of Kate's coronation, Henry is abducted by the only being powerful enough to kill him: the King of the Titans.

As the other gods prepare for a war that could end them all, it is up to Kate to save Henry from the depths of Tartarus. But in order to navigate the endless caverns of the Underworld, Kate must enlist the help of the one person who is the greatest threat to her future.

Goddess Interrupted is the second book in the Goddess Test series, beginning six months after the first book.  There is a bridging novella, The Goddess Hunt, that covers that six month gap.  The more we get to know the different characters, the better the books get.  I love the blending of traditional Greek mythology with contemporary humor and interesting reimaginings.

It is quite unusual to have a married heroine in a YA novel.  There is nothing wrong with that, but it is something you don’t often see.  It is in keeping with the story line, but I wonder how that detail plays to readers who are actually in the YA demographic.  Which I am most definintely not, but I have kids who are, so does that count?!

I love Greek mythology and I like the way that they author uses it.  For purists… yes, there are changes to the traditional mythology, but that is a part of retellings and reimaginings of established lore.  Watching ancient gods and goddesses deal with modern problems can be rather funny at times.

In keeping with that, the gods and goddesses change their names with their times, established in the first book.  They maintain their character traits that we all know, but are given a bit of an update.  For someone who loves Greek mythology, its’s fun to pick them out and identify them.

Kate and Henry have an interesting story.  Both have come into their relationship with baggage and I like that the author didn’t make that all magically go away once they were together.  Things like that don’t go away overnight, and Carter recognized in the transformation of that relationship.

The one thing that bothered me with the portrayal of their relationship was Kate’s reaction to it throughout most of the book.  She spent a lot of time in angst over Henry and his behavior, and feeling bad about herself because of his baggage.  I suppose part of that is her young age, newly married.  But there were times when I just wanted to see her stand up and get angry.

If you enjoy Greek mythology and reimaginings, this is a great book!  You should read at least Goddess Test first, as this is not a standalone novel.  I would also recommend reading the bridging novella, The Goddess Hunt.

It hurts being the one who loves more.

If I were a better man, I would be able to show you the love and affection you deserve. As I am not, I can only offer you what I’m capable of giving. But I assure you, just because I do not show it, doesn’t mean I do not feel it.

You can say you love me all you want, but if you only ever act like the opposite’s true, then I can’t trust your words anymore.

Being brave doesn’t mean never being afraid, you know. It means going for it anyway because you know it’s the right thing to do.

I don’t want to be the person who tries to force you to feel something you don’t.