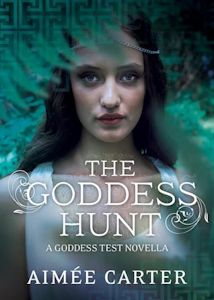 A vacation in Greece sounds like the perfect way for Kate Winters to spend her first sabbatical away from the Underworld...until she gets caught up in an immortal feud going back millennia. Castor and Pollux have been on the run from Zeus and Hades's wrath for centuries, hiding from the gods who hunt them. The last person they trust is Kate, the new Queen of the Underworld. Nevertheless, she is determined to help their cause. But when it comes to dealing with immortals, Kate still has a lot to learn....

The Goddess Hunt tells the story of Kate and James during her time away from the Underworld.  It was supposed to be a fun-filled trip to Greece, right up to the point that Kate finds herself in the middle of a feud between immortals.  And then the action begins…

This book was action-packed and we see a lot more of Kate’s strength in it.  I also fell just a little bit more in love with James, which is awkward since Kate isn’t free to be with him, no matter how much I want that to happen!  I am not all that into overly broody, seemingly unattainable romantic heroes, so it was nice to see a little bit more of human, empathetic side of Henry in this story.  Kate’s compassion is also the central focus in this book when she champions for Castor and Pollux.  I love that the fact that she is now living among the most powerful beings does not deter from doing what she feels is right.  She is fiercely independent, her own person.

Six months. One hundred and eighty-four days. That was how long I had to stay away from Eden, where Henry, my brand-new husband, waited for me to return in September. Looking forward, it seemed like forever, and the idea of being away from him for so long made me ache (Loc.67).

“You know that Kate called Walter a heartless bastard?”
“And an asshole. I am quite proud
(Loc. 667).”

I opened my mouth, but before I could say a word, Henry’s enraged cries filled my ears, and I fell to my knees as the world went black (Loc. 1095).

If you love Greek mythology and enjoy retellings and reimaginings of traditional legends, then I highly recommend this book.  The first book The Goddess Test, should be read before this installment.