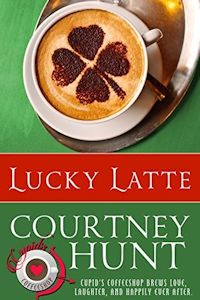 When Claire O’Shaughnessy needs a date for her younger sister’s upcoming wedding, her new co-worker Grayson March offers to help her—for a price. She’ll have to let him work with her on their firms biggest account.

To pose as her lover, Grayson takes a crash course in getting to know Claire. They quickly learn that a fake romance might just turn out to be the real thing…in Lucky Latte, third in the Cupid’s Coffeeshop series.

Lucky Latte is the third novel in the Cupid’s Coffeeship series and one that left me with mixed feelings.  This one centers around Claire and her coworker Grayson, who swooped in from out of town and stole the job Claire wanted for herself.  And for Claire, who lives and breathes work, this was a deal breaker.  But when she finds herself in need of a fake boyfriend for her sister’s wedding, he swoops in again and offers to save the day.  Maybe Grayson isn’t so bad after all.

The pressure that was put on Claire by her family to have a man annoyed me a little.  It was as if her life couldn’t possibly be complete if she didn’t have a husband and that is a concept that really rubs me the wrong way.  But as I got to know the family, it made a little more sense.  And old Irish family with a matriarch that supposedly had less than modern beliefs about the proper life of a young woman.  My other issue was Grayson’s approach to Claire.  He basically tried to take over an important client in payment for doing Claire a favor.  I didn’t like the idea of professional blackmail of a woman and that really got under my skin.  And given that, the biggest sticking point for me was the speed with which they got intimate.  Considering that he had basically steamrolled her, it just didn’t seem realistic that she would be so willing to be so intimate.

While this wasn’t my favorite of the series so far, it was still a good read and I will keep on reading the series.  I think my complaints are probably more personal and that shouldn’t deter anyone from reading this romance.