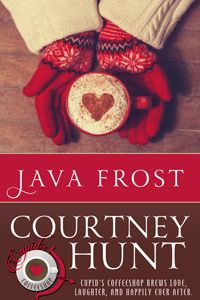 Join us in the quaint and charming town of Ashford Falls, nestled in the shadow of the Blue Ridge Mountains for the heartwarming Cupid’s Coffeeshop series, featuring an entire year of couples finding their happily-ever-afters, filled to the brim with warmth, humor, and a dash of the unexpected.

Patrick, Joe, and Zooey Lockhart inherit their grandmother's coffeeshop--with the caveat that they have one year to make it profitable. If they don't, they lose everything--including each other.

In this month's installment of the Cupid's Coffeeshop series, Java Frost ...

A fairy tale ending wasn’t in her future…

Preschool teacher Amy Lane’s Prince Charming must have gotten lost along the way to quaint Ashford Falls. Maybe she’ll need to get out into the world to find him. But to find love and adventure on her travels, she needs a part-time job quick.

Life threw him for a loop…

Ben Brooks knows more about curing cancer than he does about raising kids. He spends all his time in his lab, searching for a cure, and avoiding contact with people. Growing up as a child prodigy, he’s never been good with relationships, but now he’s suddenly responsible for his young daughter, Livvy. At a loss for how to relate to the solemn, quiet child he knows he needs help and he needs it fast.

When Livvy and Ben meet Miss Amy in Cupid’s Coffeeshop, she easily gets Livvy to giggle. Hoping to learn her technique, Ben hires Amy to teach him to have fun with his daughter. But when he falls hard for the lively woman who brightens the gray January days, will lessons in fun turn into playing for keeps?

Step into Cupid’s Coffeeshop, where happily-ever-afters are served daily.

Java Frost is the first in Courtney Hunt’s Cupid’s Coffeeshop series.  Every month features a new novella and a new happily ever after.  And Java Frost is a great start to the series!

The book opens with Joe, Patrick, and Zooey, who have recently inherited the coffee shop from their recently passed grandmother as part of a unique provision.  They have one year to work together to make it a success.

But even though the story opens on the three of them, and although they are sprinkled throughout the story, the story’s focus is really on Amy and Ben and Ben’s daughter Livvy.  Amy is a fun-loving woman that is full of life.  She is also one of Livvy’s preschool teachers and Livvy adores her.  But Ben is a different kind of guy.  He loves his daughter, but his world is science.  He wants to connect to Livvy, to make her laugh and giggle, but just doesn’t know how.

Ben and Amy couldn’t be more different people and that’s what makes the story work.  What also made the story work for me was Ben’s obvious devotion to his little girl.  I love seeing that kind of father portrayed in fiction, especially romantic fiction.

This is a quick read, but one I really liked.  Sometimes the love theme doesn’t work in a novella, becoming too instalove for my taste.  But I didn’t feel like this was the case with Java Frost.  Yes, it was fast, but somehow it just fit with the different personalities.  Right time, right place!  And with just enough steaminess to keep it real.  I definitely recommend this one for anyone who is looking for a quick bite with an HEA!