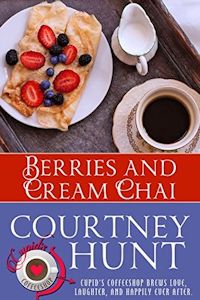 When Joe Lockhart goes on the hunt for the perfect seasonal berries for his new signature drink, Berries and Cream Chai, he finds them at Berry Hill Farm owned by the alluring Molly McCarthy. Can he charm her with his playboy ways?

Molly's desperate to save her family farm by turning into a pick-your-own place filled with wholesome family fun. To attract customers to her struggling farm, Joe brings his “Cupid’s Cup of Joe” coffee truck—along with his viral fame as the coffee hunk—around on the weekends.

And suddenly, Molly’s got much more than she can handle—including the coffee hunk who just may steal her heart.

Berries and Cream Chai is the 6th novella in the Cupid’s Coffeeshop series.  It is the first one in which one of the three coffeeshop owner’s is the focus of the love story.  It is Joe’s turn to find love, the diehard bachelor who has never had a serious relationship.  His story is like a lot of our own, burned by love badly enough to not believe in it any more.  But for him, the love that burned him wasn’t his own romance, but that of his parents.  That’s something I can understand.  So his story was really one that I found relatable and inspiring.

Joe has spent his adult life living like a nomad.  No roots, no ties.  Living in the moment from one adventure to the next, never staying in one place for very long.  At least, not until his grandmother’s will forced a change.  But even though he is abiding by her terms, if only for his cousins, he is aching to get back on the road.  But that was before he met Molly who changes everything for him.  Molly has a story of her own that leads her to upend her life in order to find new happiness.  The two of them together is really a sweet love story.

I think this is my favorite of the series so far.  I really like Joe and his story and, while it was a bit instalovey, I felt like it worked for a character like Joe’s.  A great addition to the series!