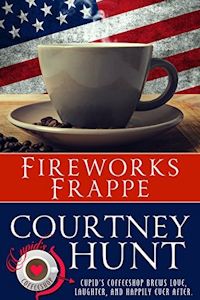 Growing up, Ava Lane swore she’d never come back to the tiny town of Ashford Falls or the man who shattered her heart, firefighter Duncan Knight.

Unfortunately, after losing her high-powered job on Wall Street, Ava doesn’t have anywhere else to go.

As she struggles to figure out her comeback plan, can she escape without being singed by love in July’s Fireworks Frappe?

Fireworks Frappe is the 7th novella in the Cupid’s Coffeeshop series.  This installment is the love story of Ava, the twin sister of Amy whom we met in an earlier novella.  She has come home after years away for her sister’s wedding and is dreading it.  As it always seems to happen, when you are already down, life kicks you yet again.  And this is true for Ava.

I liked this story… right up until a point near the end.  And that’s where it lost me a little.  It went from 0 to 60 in the span of a paragraph or two.  But it was still a sweet love story.

While it wasn’t my favorite of the series, it is still a fun read and I am ready for the next!

« Berries and Cream Chai
Everything, Everything »