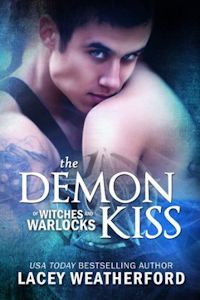 Can someone else's past come back to bite you?

After being drained of nearly all the blood in her body, novice witch, Portia Mullins, wakes up to find that her warlock boyfriend, Vance Mangum, has fled in search of his demon father. Determined to keep him from facing the evil alone Portia follows after him, unknowingly setting herself on the path of a new adventure that will take her, Vance, and their coven over international borders, into a foreign place where they will discover that the black magic which awaits them is far worse than they ever imagined. Portia finds herself tangled up in a web of lies and deceit in another's quest for demonic power in the excitingly romantic second paranormal novel in the Of Witches and Warlocks Series, The Demon Kiss.

After leaving you with an enormous cliffhanger, this installment of the Of Witches and Warlocks series opens with equal dramatic flair.  Portia, almost dying in her attempt to save Vance’s life, awakens to discover that Vance has gone.  In his desire to keep her safe, he has left her to search for his father and to face him alone.  She refuses to allow him to face this evil alone, however.  Portia, her best friend Shelley, who had her own recent brush with Vance’s evil family, and Shelley’s boyfriend Brad track him down and eventually Vance realizes he is stronger with Portia than without her.  The entire coven is drawn into the increasingly dangerous mission to save Vance and destroy the demon coven over which his father rules.

From the very beginning, I was drawn right back into the story of Portia and Vance.  Portia’s pain at the beginning, both physically and emotionally, was so tangible that you felt for her.  Brad and Shelly were far more in the forefront of the story this time, which I really enjoyed.  Their skepticism and then excitement at learning about the existence of magic was endearing.  I loved that they not only didn’t judge their friends for their differences, but accepted and embraced it and supported Portia and Vance in every way.  Vance’s apparent overprotection and Portia’s meekness drove me crazy to the point that I cheered out loud when she finally exploded, which earned me odd looks from my sick 9yo!  But that is the mark of superior storytelling, involving your reader to the point that they are that fully invested emotionally.  And I was definately invested!

The story was as action-packed as the first in the series, and just as engrossing.  And once again, Lacey Weatherford was the Queen of the Cliffhanger!  She gets to that edge, and just stops, leaving you wanting MORE, somehow without allowing the reader to feel unsatisfied.  A-MA-ZING!

One response to “The Demon Kiss”