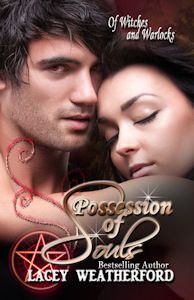 Fear and desperation leave Portia and Vance clinging to threadbare hope as life is given, and taken away. Manipulated, driven by bloodlust and the desire to claim sole possession, the stakes are raised higher than they've ever been before. Evil rises with the intent to dominate, leading them and their coven to the ultimate confrontation—a battle which will force one of them to make a devastating, life-altering decision. Who will survive the final stand?

Possession of Souls is sadly the last of the Of Witches and Warlocks series by author Lacey Weatherford.  This series,as a whole, has been a wonderful story and Possession of Souls was a fabulous ending to it.  As with the others in the series, Lacey has a way of drawing her readers in and holding them hostage until the very last word.  Every book is full of action and emotion and drama, and this last one is no exception.

Vance and Portia are an epic couple in the young adult fantasy genre.  By this book, Portia has truly come into her own as a woman, even as young as she is.  At the beginning, she was a bit on the meek side, always taking direction from Vance and deferring to him always.  That irritated the independent woman that I am, but it was absolutely perfect for her character and her role in the story.  But now, Portia has become strong both in herself and in her powers.  I have loved the progression of her character!  Vance began as a bit on the arrogant side, I felt, always sure he knew what was best and demanding things go as he wished.  Because of his backstory, that attitude completely fit the story, even if he tended to make me bristle.  But it didn’t matter, because Vance was still adorable and sexy!!  Like Portia, he grew over the course of the series, becoming more open and more accepting.

Lacey’s characters are all amazing, whether main or supporting, whether you loved or hated them.  They make you feel, and I love that in a novel.  I think that this book is my favorite of the series, with more twists and turns, more action and drama, and a roller coaster of emotions.  The ending was completely unexpected, and I loved it.  Even the ending had its own twists and turns and literally kept you guessing to the very last words.

In a single word,… FANTASTIC!