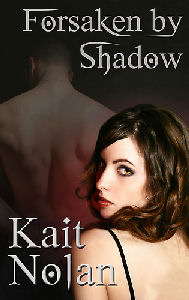 Cade Shepherd is on top of the world as this year's Ultimate Fighting Champion. He doesn't even remember his life as Gage Dempsey, a Shadow Walker with the ability to magically transport himself from shadow to shadow. In fact, he can't remember anything before waking up in a cheap motel room ten years ago with mysterious burns on his hands--not even the woman he almost died for.

Embry Hollister has picked up the pieces of her life, learned to control her ability to generate flame, and now works an enforcer for the Council of Races. But when her father is captured by the human military and the Council refuses mount a rescue mission, Embry has no choice but to go rogue. All she has to is find the man with the new name and new life who was completely wronged by her people, give him back the memories they stole, convince him to join her on what's probably a suicide mission, and hope that after ten years of living as a regular guy he still remembers what her father taught him.

And after that, she just has to leave him. Again.

He wakes up in a seedy motel, injured and with no memories of who he is and where he has been.  It is only after he drives himself to a hospital that he learns his own name, Cade Shepard, and that he has been missing since he was a small child.  But Cade still has no memory of his life so he has to rebuild his life.  He becomes a well-known ultimate fighter, enjoying his new life but always feeling like something is missing for him.  In the midst of a fight one night, he spots a woman in the crowd, a woman who is about to change his life once again.

I enjoyed this book.  The story was engaging, a great blend of the paranormal, romance and action.  The blend of reality and otherworld aspects was flawless.  My only criticism of the book is personal and has nothing to do with the quality of the writing and storytelling, and that is the portrayal of the military as relatively evil.  I’m an Army vet and an Army wife, so that’s the explanation.  Did it keep from enjoying the novella and wanting to read the next?  Absolutely not!

« Blood of the White Witch
Should We Drown in Feathered Sleep »