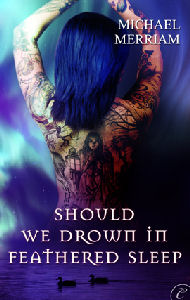 A new world is emerging years after war destroyed society. In a Minnesota lake, the last surviving loons, direct descendants of the legendary First Pair, await the one who can help heal the earth. Each year a human sacrifice is brought to them to be endowed with special gifts, but they come at a terrible price.

Even as the rest of the world rebuilds, Grace Kriske's life is shattered. Unable to walk, she feels utterly dependent on her family and trapped in a community that disapproves of her rebellious ways. Grace's only solace is her lover, David Tvedt, a trader who wants to take her away with him—if she'd let him.

Yet something else calls to Grace—the loons. They haunt her dreams, lurking in her mind as if part of her deepest primal self. But when Grace is chosen as the new sacrifice, she's afraid. Will she risk everything to help the community that shuns her, or will she choose her own path?

Grace Kiske is a prisoner of her own body in the post-war community that is all that is left of the world she once knew.  Her rebellious ways are all she has left in her control, all she has that is still all hers, and those ways make her an outsider.  She is overly conscious of how much she depends on her family to help her and she refuses to run away with her love, David, because she doesn’t want to be a burden to him, as well.  Her only freedom from the prison that is her body comes in her dreams, when the loons call to her and she swims with them.

This novella was just released a week ago, and I snapped it up on that day.  Honestly, it was the cover art that initially grabbed me, being an tattooed diva with pink hair myself!  The story takes place in a post-apocalyptic America, society taken down to the basics of living of a time long since past.  On top of which, Grace is limited physically by her injuries.  Life as she once knew it was gone and being dependent on those she loves goes against everything the onc-rebellious Grace stands for.  All of this could make for a very depressing story, but somehow the spirit of Grace shines through and there is hope among the despair.

My only complaint was that it was far too short because I wanted more!  I highly recommend this novella!

Michael Merriam was born in Michigan in 1965. He spent most of his life in west-central Oklahoma and north Texas before moving to Minnesota in 1999.

Like most writers, Michael has done a variety of odd jobs over the years: actor, poet, late night disc jockey, short order cook, bassist in a rock-a-billy band, and booking agent for a puppet troupe. Michael is legally blind due to retinitis pigmentosa.

Michael is Co-organizer and Convention Liaison for the Minnesota Speculative Fiction Writers, as well as a member of The Outer Alliance, Science Fiction Poetry Association, SteamPunk Artists and Writers Guild, and is a former member of the Online Writing Workshop.

Michael lives in Hopkins, Minnesota with his wife and a very fuzzy Maine Coon kitten.

« Forsaken by Shadow
The Red Church »