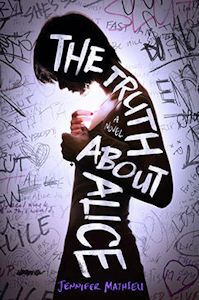 [color-box]Everyone has a lot to say about Alice Franklin, and it’s stopped mattering whether it’s true. The rumors started at a party when Alice supposedly had sex with two guys in one night. When school starts everyone almost forgets about Alice until one of those guys, super-popular Brandon, dies in a car wreck that was allegedly all Alice’s fault. Now the only friend she has is a boy who may be the only other person who knows the truth, but is too afraid to admit it. Told from the perspectives of popular girl Elaine, football star Josh, former outcast Kelsie, and shy genius Kurt, we see how everyone has a motive to bring – and keep – Alice down.[/color-box]

Wow, just wow!  This book was so intense to read, so personally emotional.  I identified with so much of this book, and that made for an emotional roller coaster of a read.  The bullying, the rumors… so much of it resonated with me, which made it that much more powerful to read.

This is a book about bullying and rumors, and all the pain, rejection, and heartbreak that goes with it.  But it is not the typical YA book about bullies.  This story is told from the points of view of 5 teens.  There is Elaine, the Queen of Healy High and the most popular girl in the school.  Kelsie is Alice’s best friend and a girl who reinvented herself from outcast to popular girl when she moved to Healy.  Josh is a popular football jock, second in popularity only to Brandon Fitzsimmons, his best friend.  Kurt is the nerdy guy with an incredible IQ, secretly in love with Alice.  And then there is Alice.  Although this is her story, she has no real voice until the very end.  Unexpected, but effective.

What is most interesting about this story is that the story isn’t just that of the victim.  It is also the story of those who started the rumors, those who perpetuated them, and those who stuck by Alice throughout the entire ordeal.  It doesn’t necessarily make those bullies any more likable, but it does give us a level of understanding that you don’t generally get in books about bullying.  Showing these people from within their own minds also gives us a level of sympathy, even if we still dislike them.

For fear of spoilers,, I won’t delve too deeply into the rumors, but they morphed into to horrible moments.  It is a book with a message, that the lies and pettiness of others can destroy another.  Alice is absolutely vilified, blamed for things she didn’t do.  I identified with Alice.  I have been in her shoes, at least to some extent, and the feeling is horrible.  Once the rumors begin, it is all too easy to lay the blame for anything and everything on that person.  It is a sad truth.

Part of me wishes the secrets we learned throughout that vindicated Alice were revealed to the world.  But on the other hand, that probably would have been too neat and life just isn’t that neatly resolved.

I’ve just never been invited to them, and even if I were to be invited, I wouldn’t attend.  I see no need in taking part in forced adolescent social rituals that would do nothing but stir up emotions of dread for all involved (Loc. 344).

This is a deeply emotional and intense read.  It is a book with a message, but it isn’t preachy.  It isn’t an easy read, but it is a profound one.

Note:  There are some themes about sex that make this probably a 15+ read.

I’m an English teacher, writer, wife, and mom who writes books for and about young adults. My debut novel, THE TRUTH ABOUT ALICE, will be out in the spring of 2014.

My favorite things include chocolate, pepperoni pizza, and this super hilarious 1980s sitcom about four retired women called The Golden Girls. I can basically quote every episode.

I live with my husband, son, one rescue dog, one fat cat, and another cat that is even fatter than the fat cat.

When it comes to what I read, I love realistic young adult fiction (duh), creative nonfiction, super scandalous tell-all memoirs and unauthorized biographies, and basically anything that hooks me on the first page.

« We Are the Goldens
My Life as a White Trash Zombie »