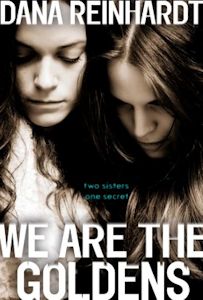 Nell knows a secret about her perfect, beautiful sister Layla. If she tells, it could blow their world apart.

When Nell and Layla were little, Nell used to call them Nellaya. Because to Nell, there was no difference between where she started and her adored big sister ended. They're a unit; divorce made them rely on each other early on, so when one pulls away, what is the other to do? But now, Nell's a freshman in high school and Layla is changing, secretive. And then Nell discovers why. Layla is involved with one of their teachers. And even though Nell tries to support Layla, to understand that she's happy and in love, Nell struggles with her true feelings: it's wrong, and she must do something about it.

This was a very interesting book that left me feeling conflicted.  There were things that I loved about it, things that I was a little put off by, things that tore my heart apart.  This is a book about sisters and family, more than love and romance… a true departure from YA literature.  That was a refreshing change.

The book is written from the point of view of Nell, the slightly younger sister to Layla.  It is written as almost a letter to Layla, which is an interesting literary form in YA lit.  It is extremely clear just how close these sisters were growing up, something that has begun to change as Layla starts to drift away from Nell.  There is no small amount of hero worship by Nell, who often seemed to see herself as the “spare to the heir” of Layla.  Her sister worship was honestly one of the things that put me off a bit.  It was often obsessive to the point of almost creepy.  At times, it felt almost like romantic obsession.  Despite that, these are fascinating characters with a lot of depth.  Nell is desperate for her sister’s attention and Layla is drifting farther and farther away, lies and secrets and shadiness galore.

The way in which this book was written, in a letter, was really interesting.  It told the story through Nell’s eyes, after the fact.  But until the end, we don’t know what that fact is, although guesses can be made.  The ending is rather ambiguous, completely open to interpretation. As someone who generally likes a standalone novel to tie everything up relatively neatly, I am conflicted about this ending.  On one hand, it made us, as readers, use our imaginations.  On the other hand, I really want to know what happened next with Layla, with Nell, with their parents.

The thrust of the story is Layla’s secret.  I put two and two together fairly quickly as to what that secret was, but the story around it was still intriguing.  Without giving too much away, there were some things about that secret that creeped me out completely.  Lines were crossed that shouldn’t have been, and I am glad that wasn’t glorified in this story.The real story was Nell’s conflict between the love she has for her sister, the need she has to do what Layla wants, and the need to do the right thing for Layla, even if that isn’t what Layla wants.

Although the book was centered on Layla and Nell, there were some great subplots that had to do with Nell and Felix, her best friend.  They were best friends as best friends should be, fully supportive of one another.  Felix had his own problems with his family, something I wish we had learned more about.  Nell, too, had her share of heartache and problems that were completely separate from the ongoing drama with Layla.

I didn’t really understand what the point of the Creed brothers were in this story.  There wasn’t a lot of explanation of why they were so important and their presence made Nell seem a bit off from time to time.

I know I ‘m supposed to want to be judged for who I am and what I can do, but I’ve never minded being judged for you (Loc. 154).

First of all, I’m terrible at chemistry.  Second of all, it would be weird if she just asked me to go and not the rest of my class.  And third of all, why does the devil always need an advocate.  Don’t you think he can argue things for himself (Loc. 796)?

I think that this is a book that is deep and intense, and worthy of a read.  My biggest issue with it was the overly obsessive relationship between Nell and Layla, but I am fully aware that this is something that could be interpreted very differently by other people.  This is the same for the feelings about Layla’s secret.  Both of these things are open to personal opinion.

Note:  There are some aspects that make this probably a 15+ read.

« Beloved Enemy
The Truth About Alice »