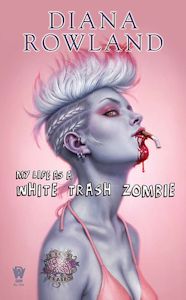 Angel Crawford is a loser.

Living with her alcoholic deadbeat dad in the swamps of southern Louisiana, she's a high school dropout with a pill habit and a criminal record who's been fired from more crap jobs than she can count. Now on probation for a felony, it seems that Angel will never pull herself out of the downward spiral her life has taken.

That is, until the day she wakes up in the ER after overdosing on painkillers. Angel remembers being in an horrible car crash, but she doesn't have a mark on her. To add to the weirdness, she receives an anonymous letter telling her there's a job waiting for her at the parish morgue—and that it's an offer she doesn't dare refuse.

Before she knows it she's dealing with a huge crush on a certain hunky deputy and a brand new addiction: an overpowering craving for brains. Plus, her morgue is filling up with the victims of a serial killer who decapitates his prey—just when she's hungriest!

Angel's going to have to grow up fast if she wants to keep this job and stay in one piece. Because if she doesn't, she's dead meat.

I absolutely love this book!  It is irreverent, gritty, raw, and yet filled with characters that are still sympathetic.  The main character isn’t just flawed… she is damaged.  Yet, even with all of that, there is a lot of snarky humor that I would not have not expected.

In a weird way, this was a bit of a coming of age story for Angel, our white trash zombie.  First, she has to come to grips with her new life and learn how to live as a zombie in a human world.  And, second, she has to grow up if she wants to stay alive.  It’s interesting that dying seems to save her life… in more than one way.

I love Angel.  She has had a rocky life and she hasn’t risen above it.  A neglectful dad, a druggie boyfriend, and an unfortunate pill-popping habit.  She’s a convicted felon, working dead end jobs that never last.  She’s a high school drop out.  She has no future, not really.  And then she dies and suddenly she has what she never even considered… the possibility of a future.  She is not created to be anything more than what she is and I love that who she is, beyond all the damage, stays true.  Her character doesn’t suddenly become Pollyanna, but remains true to Angel… in all her white trash glory.  I love, love, love that!

All of the characters in this book are fantastic.  Kang works for a local funeral home and comes off as an Asian Goth gangster, chains and all.  But Marcus, our cop love interest, he is where my heart lies.  I love that he is a cop, through and through, and yet he doesn’t judge.  He has dealt with Angel before in her rather nefarious past, but he still doesn’t judge her.  Fantastic!

In addition to being a zombie novel, it is a good, old-fashioned murder mystery.  Her role in all of this is very unique, and I am not going to expand on that for fear of spoilers!  But there are lots of unexpected moments and twists that create a lot of suspense.  If the cast of CSI survived on brain smoothies, you would be in the general ballpark of White Trash Zombie!

I’m not going to lie… the cover hooked me even before I knew what the book was about!  Fantastically wonderful!

But I’d been craving brains.  The smell was like chocolate and cookies and biscuits and gravy and everything else that was delicious. It damn near drove me crazy every time I had to touch one. I’d been fighting the cravings the way I’d never fought the urge to take drugs or get drunk (Loc 40).

“Still, waking up this early was just wrong. “Why can’t people be reasonable and only die after eleven A.M.?” I whined (Loc. 697).”

Fantastically fun, fantastically humorous… just plain fantastic!  This is a must read for supe fans, mystery fans, and snark fans!

Diana Rowland worked as a bartender, a blackjack dealer, a pit boss, a street cop, a detective, a computer forensics specialist, a crime scene investigator, and a morgue assistant, which means that she’s seen a lot of weird crap. She won the marksmanship award in her Police Academy class, has a black belt in Hapkido, has handled numerous dead bodies in various states of decomposition, and can’t rollerblade to save her life.

« The Truth About Alice
Even White Trash Zombies Get the Blues »