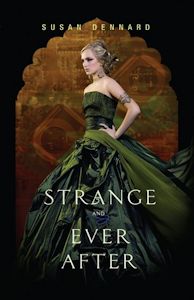 In the conclusion to the trilogy that Publishers Weekly called “a roaring—and addictive—gothic world,” Eleanor Fitt must control her growing power, face her feelings for Daniel, and confront the evil necromancer Marcus...all before it’s too late.

He took her brother, he took her mother, and now, Marcus has taken her good friend Jie. With more determination than ever to bring this sinister man to justice, Eleanor heads to the hot desert streets of nineteenth-century Egypt in hopes of ending this nightmare. But in addition to her increasingly tense relationships with Daniel, Joseph, and her demon, Oliver, Eleanor must also deal with her former friend, Allison, who has curiously entangled herself in Eleanor’s mission.

With the rising dead chomping at her every move and Jie’s life hanging in the balance, Eleanor is convinced that her black magic will see her through to the bitter end. But there will be a price. Though she and the Spirit Hunters have weathered every battle thus far, there will be consequences to suffer this time—the effects of which will be irreversible. And when it’s over, only some will be able to live a strange and ever after.

Susan Dennard will leave readers breathless and forever changed in the concluding pages of this riveting ride.

As the last book in this trilogy, Strange and Ever After neatly wrapped all of the loose ends with a conclusion that was largely satisfying, although unexpected.  The pace was picked up in this book, with all kinds of twists and turns that took the story into new and uncharted territory.

The book begins in Paris, but soon Eleanor, Ollie, and the Spirit Hunters find themselves in Marseille and finally Egypt.  The book opens with sad news for Eleanor from Allison, who has come to France from Philadelphia.  She quickly attaches  herself to the group, despite Eleanor’s every effort to leave her behind.  Eleanor is feeling very alone at the moment, estranged from not only Allison, but from Ollie and the Spirit Hunters, too.  Ollie no longer trusts her and the Hunters are still completely against Eleanor’s use of her abilities.  It has made her rather irritable and tired of having to constantly justify and explain herself.

While the romance was definitely kicked up a notch between Daniel and Eleanor, the relationship between Eleanor and Ollie was also a big focus of the story.  His anger is almost palpable and he is downright exasperating.  But as the story unfolds, we start to really understand him and why he is the way he is.  By the end, after distrusting him for most of the series, I grew to love his character.

I think the only criticism I really have was the unexpected turn of events for a particular character.  There is always loss in a novel, especially a concluding novel, but there are some losses that are more heart wrenching then others and that create a bittersweet and beautiful ending, more than a HEA.

This a great series and I am sad to see it end!  The steampunk theme is a big part of it and I love the mix of that and zombies!  Unique and fun!

« A Darkness Strange and Lovely
The Winter People »