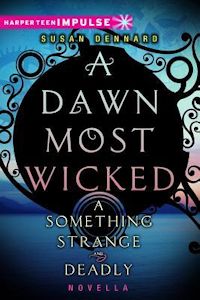 Daniel Sheridan is an engineer’s apprentice on a haunted Mississippi steamer known as the Sadie Queen. His best friend–the apprentice pilot, Cassidy Cochran–also happens to be the girl he’s pining for … and the captain’s daughter. But when it looks like the Sadie Queen might get taken off the river, Daniel and Cassidy have to do whatever they can to stop the ghosts that plague the ship.

Fortunately, there happens to be a Creole gentleman on board by the name of Joseph Boyer–and he just might be able to help them …

This is a short novella centered around Daniel Sheridan, a bit of a prequel that tells us a little bit about his past.  We meet his first love, Cass, and we learn how he came to be a part of the Spirit Hunters.

In Something Strange and Deadly, it is clear that Daniel has a bit of a “bad boy” past.  He hasn’t always lived on the straight and narrow, but we never learned much about how or why his life went down this path.  In A Dawn Most Wicked, we finally learn his secrets and his life before Eleanor.  In this novella, Daniel has already traveled down the path to crime, but he is now hiding in plain sight, working as an engineer on the Sadie Queen, a steamer on the Mississippi River.  He is secretly in love with the captain’s daughter Cassidy, his best friend.  But her father is a sadist and he has plans for his daughter that do not include a lowly engineer.

The Sadie Queen is on the verge of being decommissioned, fallen from its former glory after is has mysteriously become haunted.  Within weeks, not a single passenger remains, no new bookings made.  The captain has decided to challenge a rival captain to a race, hoping that a win will keep its owner from shutting her down.  In a chance meeting, Daniel meets Joseph Boyer and thus his life with the Spirt Hunters begins.

This is a short read, only about 100+ pages, but it is a great one!  We learn so much about Daniel and his past, the things lead him to where he is in Something Strange and Deadly.  A whole other side to Daniel is revealed, making his character more easily understand.  More than that, we learn a lot about Joseph himself, as well as Jie.  This is a great addition to the series!

While the main series is easily enjoyable without reading this book, I definitely recommend reading it.  It adds so many layers to Daniel’s character.