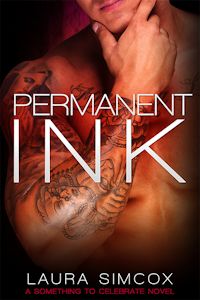 Blair Whitaker has one goal: get the hell out of Celebration, NY. Her ticket out is helping the town take the grand prize in a parade contest, which will ensure she lands her dream job. It's a win-win.

Standing in the way is Ben Lambert, a sexy, local tattoo artist whose smile makes her weak. To win the contest, she'll have to sideline his plans for the tattoo festival the town council allowed on the same weekend. But trying to thwart Ben is more than she bargained for, and before she knows it, she's starting to see Celebration–and Ben–as something more than a temporary distraction.

But Blair's in too deep to change directions now. Celebration is behind the parade contest, the mayor revokes the tattoo festival permit, and Blair is on the cusp of getting everything she'd planned.  But coming clean will turn Ben against her for good, and going forward means losing what she really wants and hurting the town she's grown to love.

I love this Something to Celebrate series!  The first book, Ivy Entwined, introduced us to a small town in central New York, Celebration.  This latest book, Permanent Ink, has many of the characters from the first book that I loved, as well as some new faces to Celebration.  I can’t deny that as a inked and steeled mama, I love Ben Lambert, the tattooed hunk of manliness at the front and center of this book!

This one centers around Blair and Ben.  Blair has come to Celebration from NYC to stay with her Aunt Lola (whom we met in the first book) after her life took a downward turn.  Blair is in a bad place in her life, ambitious and wanting more for herself.  Coming home with her tail between her legs was never part of her plan.  But she finds an unexpected opportunity in Celebration, one that could get her career back on track.  But then there is Ben, a inked hottie with a big heart, and more than a few secrets of his own.

While Blair and Ben are our main characters, there is a whole cast of supporting characters that are as nutty as the others, some of whom we met in the last book.  Ivy, Marcus, and Ivy’s crazy grandmother are back, the latter of whom was one of my favorites.  Ben’s friend and mentor Grizz is hilarious and clearly the father figure in Ben’s life.  And then there is Starling…!  This chick was nuts in so many ways, but an interesting character with a story line of her own that pretty much tore me up.

This is what I love so much about these books.  So many of the characters, whether main or supporting, have their own story lines that are fantastic.  They may not be the focus of the story, but they are just as interesting.  The author has a way of making you feel like you are a member of the community, invested in the characters as you would be with a friend.

This is a book that could probably be read as a standalone, but it is so much more if you read Ivy Entwined first.  This is a great book with a great story and fantastic characters! 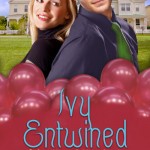 « July Wrap-Up
A Dawn Most Wicked »