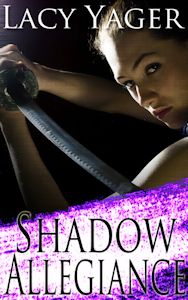 [color-box]A vampire hunter-turned-vampire seeks to destroy her enemies. Until she falls for one of them.A Chaser born to kill vampires, sixteen-year-old Rachel Campton has grown up in her older brother's shadow. Until she wakes up a vampire, her own mortal foe. She's stronger, faster than her human self, but haunted by bloodlust and the loss of her beloved younger sister. Friendless and lost in enemy territory, Rachel must rely on Alex Wellington, a former nemesis and centuries old vampire who looks like a college football player.As Rachel goes deep into vamp territory, she learns there is more to the vampire life than killing humans. She also discovers another side to Alex. He is more than a murderer, he is someone that she starts to fall for. Rachel faces the ultimate choice--her new life and unexpected love or the family she left behind, the family that may now want her dead.[/color-box]

I have really enjoyed these books!  They are vampire books with the most important of vampire tropes included, but with a fresh new premise.  There is a lot of depth in these books through some interesting subplots that add a lot to the story.

This installment focuses on Rachel, a Chaser from the first book, and Alex, Maggie’s vampire cousin.  In Unholy Aliiance, Rachel was my least favorite character, even over the “bad guys.”  So  I went into this book with a bit of trepidation… which I totally didn’t need!  We got to learn so much more about her, things that completely explain why she has been the way she has.  We also learn a lot about Alex and discover that there is a lot more to him than what we saw in the last.  I love seeing the “bad boys” fall for the girl!

One of the things I like most about this series is that the love and romance, while a part of the story, isn’t the sole focus.  There is so much more to this book.  There are a lot of other themes going on that make the book relatable, despite the supernatural aspects.

It’s not a promise that he still loves me, even though I’ve made this awful mistake (Loc. 3675).

I love these books!  There is enough of traditional vampire lore to satisfy lovers of vamp fiction, but their are some new twists that make it so interesting.  If you love good  YA vamp fiction with some bite to it (LOL!), this is a good series to read!