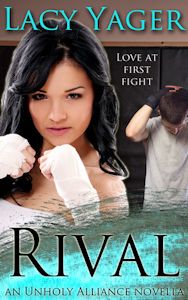 Her destiny. His determination.

Born a fifth generation vampire Chaser, seventeen-year-old Emily Santos wants nothing more than to join the family business. But Emily's mother refuses, so Emily must channel her aggression into her martial arts training.

Black belt senior Brett Carson has decided it's time to rid himself of his unrequited feelings for Emily. But when he finds himself in the middle of an altercation with Emily and a gang of vampires, he is drawn into a world he never expected. And Brett is hiding a secret of his own...

Rival is the second book in the Unholy Alliance series, a quick novella-length read.

We meet some new characters this time… Emily, Brett, and Erick.  I love Emily as a YA character.  She is a tough girl and not afraid to get in the middle of the fray to do what is right.  She is determined to prove herself and follow in her father’s footsteps, even though it is a constant struggle with her mother.

Brett and Emily are really the focus of the book, and not just because of their romance.  The romance was great, however!  I love the fact that it was the guy that had the unrequited feelings, instead of the usual girl.  There are some interesting dynamics between them, secrets that make a difference.  But there is more than the romance between them.  Their characters are equals, fully supportive of one another.  Brett accepts Emily for who and what she is without trying to change her.  She learns his secret and doesn’t judge for him, but admires him.  I love the message that sends.

I’m too flat up top, too tall, and too skinny to pull off any of these formal gowns. On the other hand, the gowns with strapless or spaghetti straps show off my biceps nicely. Too bad I can’t have a kama—a traditional Filipino weapon, looks like a scythe— as an accessory (Loc. 2529).

We aren’t friends now and never will be, if I have anything to say about it. I don’t hang with quitters (Loc. 2573).

But I’m the one who’s instantly caught up in the heat of his mouth against mine. He takes advantage, angling his head and using one thumb to guide my chin down just so— and the sensation intensifies (Loc. 2786).

This novella sets the stage for more in the series and I am looking forward to it all!