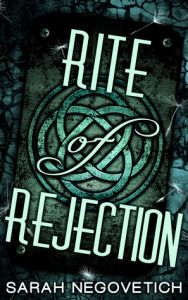 Straight-laced, sixteen-year-old Rebecca can’t wait for her Acceptance. A fancy ball, eligible bachelors, and her debut as an official member of society. Instead, the Machine rejects Rebecca. Labeled as a future criminal, she’s shipped off to a life sentence in a lawless penal colony.

A life behind barbed wire fences with the world’s most dangerous people terrifies Rebecca. She reluctantly joins a band of misfit teens in a risky escape plan, complete with an accidental fiancé she’s almost certain she can learn to love.

But freedom comes with a price. To escape a doomed future and prove her innocence Rebecca must embrace the criminal within.

Rite of Rejection is a beautifully written YA dystopian novel, the first from Sarah Negovetich.  I became thoroughly engrossed with this book from the moment I started reading it!  The characters were interesting, the story premise was disturbing in its potential reality, and the action was on point.

We meet the heroine Rebecca at a crucial moment in her life, the day that she is accepted or rejected as a full-fledged member of society.  It is society’s coming of age ritual, one approached with glitz and glamour and pomp and circumstance.  The actual day is kind of like graduation meets cotillion, yet so much more potentially life-altering than either of those events.  Although all of the characters are interesting, Rebecca is the most fully developed.  She is intelligent, more than a little naive, and totally out of her element for her new life.  Her new life is brutal and she is far too trusting.  It is fortunate for her that she falls in with the people that she does.  There is a clear message there that intelligence doesn’t make you infallible!

I do wish that we had gotten to know a bit more about some of the core group of characters.  We learned a bit about Molly, Elizabeth, and Daniel, but I would like to have known more about Eric and how he came to really be as he was.  There was also a less central character, Constance, whose part may have been small, but whose humanity showed through.  There was such a bittersweet tinge to her story and it was touching.

The world that the author created was rather terrifying, in and out of the PIT, the area in which those deemed undesirable were spent for the rest of their lives.  The idea of living in a society in which one’s entire future is in the hands of a machine that no one outside of those in the know understand.  No one really knows what it is that marks someone for rejection and the implications are scary at best.  The societal norms, too, were a bit surprising.  Ideas about relationships and functional families were throwbacks to a time in our own reality’s past.  Women were barely educated, outside of the domestic arts.  They were not expected to work, but to be housewives and rear children.  Men, however, were more educated and assigned jobs.  The belief was that these roles made for a more perfect, more ordered society.  Any deviation from these rules were likely to leave you rejected.

The PIT, too, was frightening.  It was Skid Row on a more epic scale.  All of society’s undesirables were housed here, treated horribly.  It was lawless and chaotic, every moment a trial of survival.  The author was able to so vividly describe it that I cpuld practically smell the rotting garbage and feel the dirt on my skin.

I have no idea if this is a standalone or there are more in store, but I hope for the latter.  The ending was satisfying, easily a cliffhanger but with enough resolution that I felt fulfilled.  Great read!

This is a great story about resilience, human nature, and the cost of a sseemingly utopian society.

Sarah Negovetich knows you don’t know how to pronounce her name and she’s okay with that.

Her first love is Young Adult novels, because at seventeen the world is your oyster. Only oysters are slimy and more than a little salty; it’s accurate if not exactly motivational. We should come up with a better cliché.

Sarah divides her time between writing YA books that her husband won’t read and working with amazing authors as an agent at Corvisiero Literary Agency. Her life’s goal is to be only a mildly embarrassing mom when her kids hit their teens.