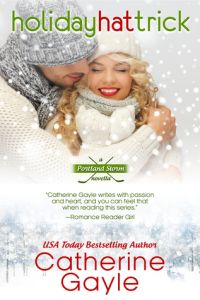 Mitchell “Q” Quincey, a journeyman playing for the Portland Storm, has three goals for his three-day Christmas break.

1. Move the rest of his gym equipment out of his ex-wife Mia’s house.
2. Get his lawyer to file a petition for joint custody.
3. Spend every last minute he can with his baby girl.

When he arrives on Mia’s doorstep, things don’t go as planned. With her whole family gathered for the holiday, the only way he can spend time with their daughter is to spend time with the whole clan. The compromise is doable, if not ideal, because he’s still in love with Mia and she won’t take him back.

Having her ex-husband show up completely unannounced at Christmas throws Mia off her game. The least Mitch could have done is called so she could have emotionally prepared herself to face him. Instead, the love and attraction she still feels for him combine to leave her fumbling for excuses. He’s always been able to leave her flustered, but now that he’s making himself part of the family again, she’s afraid she’ll lose her nerve and fall back into old patterns.

Things heat up on a snowy Christmas Eve, and Mitch decides to change his goals on the fly. With assists from Mia’s family and a bit of mistletoe, he might end up with a Holiday Hat Trick.

As always, I love this latest installment in the Portland Storm series by Catherine Gayle!  This is a shorter read, but it is a fantastic addition to the series!

Holiday Hat Trick is not on the ice this time, but takes place over the league-mandated holiday days off.  It centers on a newer player, Mitch Quincey.  He and his wife Mia have been divorced for several months, a decision that was Mia’s.  He is still desperately in love with her, but has realized that winning her back is a lost cause.  So his focus this vacation is to get the last of his things, file for joint custody, and see his little girl as much as possible.  I was in love with him from the moment he began to coo about his daughter!

I was prepared to dislike Mia, but I just couldn’t.  I didn’t want to understand her position, because this is a man who clearly loved her and their daughter and who was a legitimately good guy.  A good guy that she tossed aside.  But as we got to know her, I realized that there were reasons that she did what she did, reasons that I could wholy understand.

This is the thing I love most about these books, besides the hockey!!  That the stories revolve around real people with real issues.  The same kind of issues we all may face at some point in our lives.

While this could be read as a standalone, I love the series so much that I say… READ THEM ALL!!