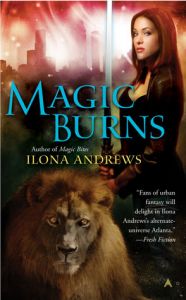 Down in Atlanta, tempers – and temperatures – are about to flare…

As a mercenary who cleans up after magic gone wrong, Kate Daniels has seen her share of occupational hazards. Normally, waves of paranormal energy ebb and flow across Atlanta like a tide. But once every seven years, a flare comes, a time when magic runs rampant. Now Kate’s going to have to deal with problems on a much bigger scale: a divine one.

When Kate sets out to retrieve a set of stolen maps for the Pack, Atlanta’s paramilitary clan of shapeshifters, she quickly realizes much more at stake. During a flare, gods and goddesses can manifest – and battle for power. The stolen maps are only the opening gambit in an epic tug-of-war between two gods hoping for rebirth. And if Kate can’t stop the cataclysmic showdown, the city may not survive…

Magic Burns is the second book in the Kate Daniels series and I loved it just about as much as I did the first.  Magic comes and goes unpredictably in the world of Kate Daniels, but every seven years there is a magic flare.  During those times, the magic runs wild and brings with it even bigger magical issues.

Because of the flare, the stakes are higher for Kate.  The flare is the one time that ancient gods and goddesses can manifest on earth and they take advantage of that.  Once on earth, it is a battle for power and Kate is stuck right in the middle of it.

I love the characters in these books.  Kate is smart and fierce and surprisingly funny.  Her love-hate relationship with Curran, the Beast Lord, is equal parts hilarious and sexy as sin.  We learn a bit more about Kate and her past in this book, although I still have more questions than answers.  That just makes me even more ready for the next book.

I think Curran might almost be my favorite part of this book.  He has no idea what to think about Kate.  She’s stubborn and unyielding and he has no idea how to handle.  As the Beast Lord, he is used to subservience, but he doesn’t get that with Kate.  She has zero problem mouthing off to him and as much as that frustrates him, he loves it, too.

This is a great series and I feel like it is just getting better!