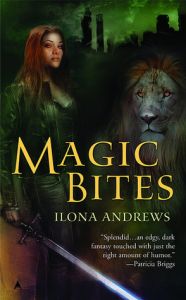 Atlanta would be a nice place to live, if it weren’t for the magic…

When the magic is up, rogue mages cast their spells and monsters appear, while guns refuse to fire and cars fail to start. But then technology returns, and the magic recedes as unpredictably as it arose, leaving all kinds of paranormal problems in its wake.

Kate Daniels is a down-on-her-luck mercenary who makes her living cleaning up these magical problems. But when Kate’s guardian is murdered, her quest for justice draws her into a power struggle between two strong factions within Atlanta’s magic circles.

The Masters of the Dead, necromancers who can control vampires, and the Pack, a paramilitary clan of shapechangers, blame each other for a series of bizarre killings—and the death of Kate’s guardian may be part of the same mystery. Pressured by both sides to find the killer, Kate realizes she’s way out of her league—but she wouldn’t have it any other way…

I don’t read a lot of urban fantasy, but I loved Magic Bites!  The action is fantastic and it features a badass heroine.  Mix that with a ton of paranormal lore and mythology, and it is a truly engrossing read.

The world of Kate Daniels is a post-apocalyptic one, but different from most in fiction.  The apocalypse wasn’t the fallout of war, famine, or strife.  It was the downfall of technology.  A wave of magic came over the world and changed everything.  Now it comes and goes, leaving technology sketchy at best.  But more than that, it has left the world teeming with new creatures and new battles.

The paranormal aspects of this world are fantastic.  There are a lot of the usual suspects of the paranormal world, but they are given a new spin.  Vampires are not sparkly, but piloted by necromancers.  And the world of shapeshifters is expanded and fascinating.

Kate is a mercenary in Georgia and it is her job to fix these magical problems, whether it be something dangerous, or just something messy and inconvenient.  It’s a thankless job, but it’s one she’s very good at.  And it lets her be what she wants…. alone.

She is a fantastic main character.  She’s strong and badass, but smart and witty, too.  For a book with so much action, there is a lot of humor.  Her one-liners and her inner dialogue had me laughing more than once.

This is a book with a smart, kickass female lead and I definitely recommend it!  Tons of action and an amazing world!