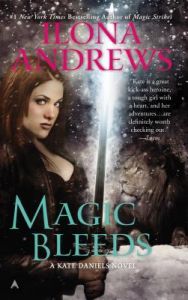 Atlanta would be a nice place to live, if it weren’t for the magic. When the magic is up, rogue mages cast their spells and monsters appear, while guns refuse to fire and cars fail to start. But then technology returns, and the magic recedes as unpredictably as it arose.

Kate Daniels works for the Order of Knights of Merciful Aid, officially, as a liaison with the mercenary guild. Unofficially, she cleans up the paranormal problems no one else wants to handle—especially if they involve Atlanta’s shapeshifting community.

When she’s called in to investigate a fight at the Steel Horse, a bar on the border between the territories of the shapeshifters and the necromancers, Kate quickly discovers there’s a new player in town. One who’s been around for thousands of years—and rode to war at the side of Kate’s father.

This foe may be too much even for Kate and Curran, the Beast Lord, to handle. Because this time Kate will be taking on family…

I think Magic Bleeds, the fourth novel in the Kate Daniels series, is my favorite.  I loved everything about this book.  The story, the characters, the mythology, the action.  All of it combined to make a novel that was hard to put down!

Kate Daniels is probably my favorite female protagonist.  She is fierce and strong.  She knows her own mind and she isn’t afraid to speak it.  She is smart and independent.  She is funny and brave and everything I want to be.

All of these things make her the kind of person that won’t back down from a fight when it is for something she believes in.  And that is truly the premise of the novel.  She finds herself fighting the battle of her life and it forces life-changing decisions on her, decisions she never dreamt she would be in a position to have to make.

This story, while just as full of action as the others, felt somehow more personal.  Kate has spent a lifetime avoiding personal relationships, whether romantic or friendships.  But there comes a time when those things develop and now she has to make the worst kinds of choices.

A lot of questions are answered in this book, but by no means is the story over!! The best yet!