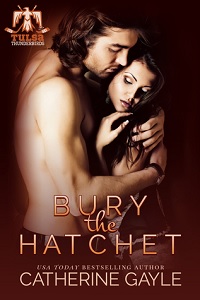 FTC Disclosure: I may have received this book for free from publicist in exchange for an honest review. This does not affect my opinion of the book or the content of my review.

[color-box]He was poised to be an elite goalie for a contending team.

Hunter Fielding has long since proven himself to be one of the best goaltenders in the NHL. The problem? His former team had another (slightly better) backstop. They left Hunter out to dry, the upstart Tulsa Thunderbirds claimed him in the expansion draft, and he made a few stupid comments about backasswards Oklahomans. Now the T-Birds say the only way he can redeem himself is to make nice for the media with some local goody two shoes who’s made some mistakes of her own.

Tallulah Belle Roth was the reigning Miss Oklahoma USA until a night of out-of-control drinking, a naked foray in a hot tub with very bad boy, and a bunch of lowlights on TMZ. Now she’s been stripped of her crown and is facing the censure of the same people who made her out to be Little Miss Perfect. Tallie won’t ever get her title back, but her life is another matter—and the only way the public will allow her to do that is if she presents herself as happily settled with someone else under Oklahoma’s eye.

The marriage is to be in name only—one year of sickeningly-sweet lovey-dovey PDA, all to get their detractors to bury the hatchet. Those kisses and tender moments for the cameras take an emotional toll, though. Can in name only be enough? [/color-box]

I am a huge fan of Catherine Gayle’s hockey-themed romances!  I have read every one that she is written and they are each amazing reads.  The knowledge that the author has of hockey and the behind-the-scenes of it all is obvious and seen in the incredible attention to detail.  But the stories aren’t all about hockey.  The plots are raw and real, stories that many of us have experienced in some way for ourselves.  Bury the Hattchet is the first in the new Tulsa Thunderbirds series, a spinoff from the Portland Storm series.  Along witb a new team and new cast of characters, there are still some familiar faces from the Portland Storm books.

One of those familiar faces is Hunter Fielding, formerly of the Portland Storm.  He is undoubtedly one of the best goalies in the NHL and he has just been traded to the Tulsa Thunderbirds.  The Thunderbirds are a new franchise in the NHL, which translates to an expectation of a few rather less than stellar years in hockey stats.  New team, new players, many of whom aren’t to the level that Hunter himself is.  Needless to say, he is unhappy about the trade and makes some rather unflattering remarks about it in an unfortunate drunken rant that went viral.  That means a whole lot of damage control with the new team… and this happens in a completely unforeseeable way.  A marriage in name only to a fallen beauty queen with some damage control issues of her own.  In comes Tallie, Oklahoma’s favorite pageant queen who had an unfortunate drunken incident of her own that also went viral, tarnishing her image.  Her mother and her pageant coach convince her that the only way to clean up her image is to marry Hunter.

I couldn’t imagine two more unlikely people to be at the center of this book… the rough hockey player and the goody two-shoes beauty queen.  Hunter is rough around the edges and angry and Tallie used to being told what to do and having no input on her own life.  But, as usual, Catherine Gayle creates a story that is full of tension, romance, intense emotion, and plot twists.  Hunter is angry and it is obvious.  He is angry about being shuffled off to a team that he sees as a demotion.  He is angry about being forced into this marriage.  He resents everyone involved, even initially Tallie herself, despite the fact that she, too, has been forced into the situation.  But he has protective, softer side, too, especially when it comes to Tallie.  I loved the interaction between them!  She softened him, opened him up a little.  And he taught her to be her own person.  Until Hunter, her entire life had been ordered by her mother and her coach,  To say that the two were overbearing would be an understatement.  There were times that I wanted to jump into my Kindle and throttle them both and slap Tallie into taking charge!

The incredible character growth is probably my favorite aspect to these books.  They grow and change over the course of the novel, changing without losing themselves to another person.  Too many times, in literature and in life, the dynamic of change within a relationship means that one or both of them lose the who they are to the other person.  I love that Catherine’s characters become better versions of themselves, rather than acquiesing to the other.  This is what keeps me coming back for more!