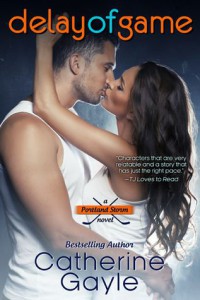 With her father’s health in question, Sara Thomas is focused on reducing his anxiety. That’s no small feat considering his high-stress job, not to mention her own distractions. Everyone knows Sara’s single; no one knows she’s pregnant. There’s never a good time to unexpectedly get knocked up, but now is definitely not it. Regardless, she doesn’t want anyone to know—especially not her father—until she has a game plan in place. But when Jonny, one of her father’s players, seeks vigilante justice on the ice, everything gets tossed out the window.

Cam Johnson’s role as a fourth-line winger with the NHL’s Portland Storm entails more than scoring goals. He has to ensure other teams don’t take liberties with the Storm’s star players. The way Cam sees it, that’s the most important aspect of his job. His teammates call him Jonny; opposing fans call him a goon; the media calls him an enforcer. The title’s unimportant. Cam will always fight for his team—even if he has to break the rules. He’s used to taking penalties, but he never meant for anyone else to suffer from his choices.

When Cam’s actions cause Sara’s worst fears to be realized, he blames himself. He’s screwed everything up; now he has to set things right. Mutual attraction leads to lust, and suddenly Cam is taking penalties at every turn…at least where Sara is concerned. He’s got to think on his feet or he’ll end up with a Delay of Game.

I have loved this series since the very first book!  Hockey and romance and real issues… what’s not to love?!  Cam is a fabulous romantic hero, strong and powerful, yet a big softie at heart.  Sara is a great character, totally devoted to her father and carrying a bit of baggage of her own.

I love that the author brings the whole hockey “family” from book to book, just focusing on a new couple each time.  This one was interesting because it brought together two people we already knew from the other books.  For me, this book was the most intense emotionally.  There is some real sadness and heartache in the midst of a beautiful story, and it really resonated within me.

That is one of my favorite things about the books in this series, that the author doesn’t shy away from real subjects and real emotions.  Not everything is blissful in Romance Land; there is heartache and pain and loss right along with the love.  I can’t stand a romance where things come to pass too easily.  That doesn’t feel real.  That isn’t something that I can relate to because real love and relationships, life, is messy.  These books have all of this.

I have a hard time deciding which of the series is my favorite.  Each one brings a new part of the story of the Portland Storms family.  This one was emotionally hard for me to read but the story was beautiful!

The others in the series should be read in order to fully appreciate the story.  But this is a fabulous addition to the story!