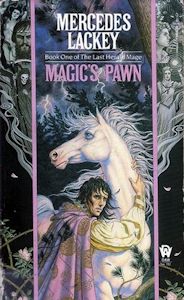 [color-box]Though Vanyel has been born with near-legendary abilities to work both Herald and Mage magic, he wants no part of such things. Nor does he seek a warrior's path, wishing instead to become a Bard. Yet such talent as his if left untrained may prove a menace not only to Vanyel but to others as well. So he is sent to be fostered with his aunt, Savil, one of the fame Herald-Mages of Valdemar.

But, strong-willed and self-centered, Vanyel is a challenge which even Savil can not master alone. For soon he will become the focus of frightening forces, lending his raw magic to a spell that unleashes terrifying wyr-hunters on the land. And by the time Savil seeks the assistance of a Shin'a'in Adept, Vanyel's wild talent may have already grown beyond anyone's ability to contain, placing Vanyel, Savil, and Valdemar itself in desperate peril... [/color-box]

I love all of the series and singles that make up the entire Valdemar saga, and this one has always been one of my favorites.  Vanyel is a character that I think, in some way, is a universal character that we can all identify with in one way or another.

Vanyel Ashkevron is the eldest son of a rather minor noble in the out country.  His father is a rigid man, believing very firmly in certain things.  And if you do not fall into his idea of what should be or what is right, then you are somehow lacking.  This describes the relationship between Vanyel and his father for most of his childhood.  His brothers and cousins, while not stupid, were far more interested in weaponswork and women than intellectual pursuits.  Vanyel was intelligent and a gifted musician that took after his mother far more than his father.  None of these things raised him in the eyes of his father.  His mother, however, celebrated most of these things.  She was a flightly woman who knew all too well how to play all of the “womanly” games and she loved having a son who could entertain her so well.  However, she spent a lot of time throwing her lady’s maid at him, despite his repeated assurances that he was not interested, often creating a bit of a mess for them both.

When Vanyel’s father finally tires of trying to change him, he sends him to his aunt in Haven, a rather brusque woman who is a Herald.  Vanyel knows, even as he lives the prison that ihis own home has become, that he is really only trading one prison for another.  But things at Haven aren’t what he expects and his life changes so very much.

I absolutely love the blend of characters in this book.  No matter what your life story is, there is a character in this book that is relatable.  No two characters are the same, giving a rich tapestry of characters in a wonderful story.  I have heard many complain about the rather whiny attitude of Vanyel throughout the book.  They are not wrong; he is whiny.  But it is totally appropriate for the story.  He is a young teenager, a fact easy to forget, and the reality is that he has a lot to whine about.  I love that the character isn’t portrayed to be perfect, that he is portrayed as realistic.

« Bury the Hatchet
About a Girl »