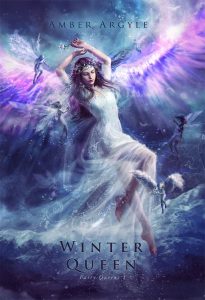 Becoming a winter queen will make Ilyenna as cold and cruel and deadly as winter itself, but it might be the only way to save her people from a war they have no hope of winning.~

Mortally wounded during a raid, seventeen-year-old Ilyenna is healed by winter fairies who present her with a seductive offer: become one of them and share their power over winter. But that power comes with a price. If she accepts, she will become a force of nature, lose her humanity, and abandon her family.

Unwilling to pay such a high price, Ilyenna is enslaved by one of the invaders, Darrien. While in captivity, she learns the attack wasn’t just a simple raid but part of a larger plot to overthrow her entire nation.

With the enemy stealing over the mountains and Darrien coming to take her to his bed, Ilyenna must decide whether to resurrect the power the fairies left behind. Doing so will allow her to defeat Darrien and the other invaders, but if she embraces winter, she will lose herself to that destroying power—forever.

I truly loved Winter Queen, the first in the Fairy Queens trilogy.  I am a big fan of all of Amber Argyle’s work (author of the Witch Song series) and this just might be my favorite thus far.  I love the author’s writing style and the rich worlds and characters that she creates.  She is phenomenal at drawing readers into her world and making it feel real.  Despite the otherworldly elements to the book, it felt possible.  Seeing things through Ilyenna’s eyes was like seeing them for myself.  I love a book that I can lose myself in and this was one of those books!

Ilyenna is a fascinating character, truly more layered than the average woman of her time and social status.  I love the fact that, as a person, Ilyenna seems real.  She isn’t portrayed as a strong, perfect heroine from the beginning, but one with uncertainty and fear and a lack of self-confidence.  What was beautiful about her was watching her find her strength.  Darrien, while clearly NOT a character a reader is going to feel for, is one that still draws the reader in.  He is that character that we all just have to hate but one that is still more than just the bad guy.  Rone was also a wonderful character, and one we the readers could root for, although I wish there had been more of him.

The author’s worlds are amazing.  They are layered with the kind of details that are not overpowering but that give the world a sense of realism.  There are some Viking elements recognizable in the descriptions of the environment, as well. The creation of the culture was seamlessly done, making it feel is if we were just being reminded of things we already know instead of feeling like a lecture to learn a new culture for the new world.  That made reading much more engaging.  I also loved the use of the theme of Balance in the book, that the Universe must have balance in all aspects of life.

This is not an average “fairy tale,” not as light as I expected based on the cover alone.  There was darkness and brutality and angst along with all of the adventure, mystery, and intrigue.  It was not overdone, but it is definitely a part of the story.  Even though the story was much darker at times than I expected, there was no shortage of romance and hope and love, which I truly enjoyed.

Things to love about Winter Queen…

Even if fairy tales aren’t your thing, I would recommend this book.  There is brutality and violence, as well as some sexual content.  The violence is mild in that it is not overly described and the sexual content is even less detailed but alluded to.  An excellent read!

« Monday Memes
Flames in the Midst »