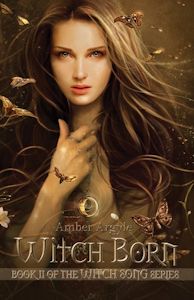 Brusenna thought it was finished. She defeated the Dark Witch, saving the Haven Witches from imprisonment and death. She found love and a place to belong. She was wrong. Haven is not the sanctuary it appears to be. Even love is in danger of slipping away like water through cupped hands. Some things can't be saved. A new threat merges with the old as the Witches' dark history begins to catch up with them. Only Brusenna knows the extent of the danger and how to stop it, though doing so might cost her everything. Including her life. Will Brusenna be required to make the ultimate sacrifice?

Witch Born is the second book in the Witch Song series and it was easily as good, if not better than the first book!  I truly love this series.  They are so engrossing and beautifully written that I know I am going to be reading for hours, completely incapable of putting it down once I have started!

Much like the first book, there is so much to love about it!  I love that the author uses song as the medium for spellcasting, rather than traditional chanting.  The spell songs Argyle created for her characters and often hauntingly beautiful, even those used in magical combat.  Although this series is about a group of witches with extraordinary lives and powers, they are still very “human” as characters.  They have failings and doubts and imperfections that combine to make them easy to relate to as a reader.  I love that because it allows me to live their stories and think their thoughts and feel their feelings.  I love the refreshing take on magic and history that Argyle created, the “how’s” and “why’s” of how the witches got their power.  The story is deeper in this book, more insights and back stories into the history of how everything came to be as it is.  I love the romance between Brusenna and Joshen as well, sweetly normal in a world of magic and chaos.  It also isn’t made out to be unattainable, “fairy tale” perfect, but fraught with the occasional argument or issue.

I know they say not to judge a book by it’s cover, but it clearly okay in this instance.  The gorgeous covers are perfect for this series!  This is a series I will be reading again and again.