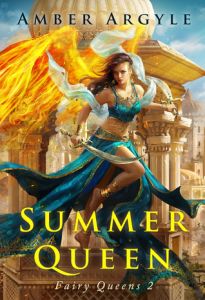 [color-box]Nelay never wanted to be queen.

Poised to become the most powerful priestess in Idara, Nelay doesn’t have time to become a pretty bauble for the king. She’s too busy saving her people from the invading army sweeping across her kingdom.

But in defeat after defeat, Nelay begins to realize a bigger power is at play than that wielded by mere mortals. Only she can stand between the cinders of her once-great nation and the vengeance of a goddess.[/color-box]

Summer Queen is the second full-length novel in Amber Argyle’s Fairy Queens series.  It takes place after Winter Queen and in a different part of the world, a part that seems to be based on Middle Eastern mythology.  I am a huge fan of the author and this series, and this book, does not disappoint!

This book is focused on Nelay, an acolyte priestess in the temple of the Goddess of Fire.  She has lived most of her life in the temple with her only goal to avoid ever being a wife and mother after seeing the pain her mother went through after loss after loss.  She has trained as a priestess, a warrior, a tactician.  She is smart and independent and yet still willing to risk it all to save a family that has essentially abandoned her.

There is so much more intrigue in this book than I had expected, with twists and turns.  There are some battle scenes that are worth of a tactical military commander which I, as a former soldier, loved!  While Nelay is the center of the story, there are a number of key players, all of whom are well-developed and who have their own stories.  I loved that there were no clear lines between good and bad with the characters, each character, as in reality, having a bit of both as the situation requires.

The tie between the two novels in this series in not a direct one, which made it rather interesting.  In Winter Queen, we meet the Clans and they were generally characterized in a postive light.  In Summer Queen, the Clans are the enemy and portrayed in a much more savage light.  It was interesting to see them in a totally different way and to have that new perspective.  Such a great series, but Winter Queen should be read first!