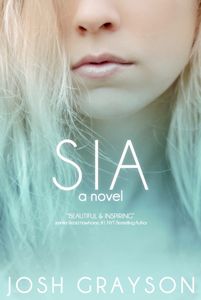 When seventeen-year-old Sia wakes up on a park bench, she has no idea who or where she is. Yet after a week of being homeless, she’s reunited with her family. At school, she’s powerful and popular. At home, she’s wealthy beyond her dreams. But she quickly realizes her perfect life is a lie. Her family is falling apart and her friends are snobby, cruel and plastic. Worse yet, she discovers she was the cruelest one. Mortified by her past, she embarks on a journey of redemption and falls for Kyle, the “geek” she once tormented. Yet all the time she wonders if, when her memories return, she’ll become the bully she was before…and if she’ll lose Kyle.

This was a truly beautiful story.  It was moving, it was emotional, it was simply gorgeous.  It is not in any way a light story, but one full of deeply intense situations and issues.  It doesn’t shy away from issues of alcoholism, bullying, judgment, etc.  It was a real story that was not glossed over.

Sia is the epitome of the spoiled little rich girl… until she wakes up on a bench in a park with no memory of who she is or how she ended up in this park with nothing more than an iPod with the name “Sia” on it.  For the next week, she ends up living a life that she never expected or paid any attention to prior to her bout of amnesia.  She is reunited with her old life after an accident lands her in the hospital, but she still has no memory of who she once was.  As she reintegrates with her family and “friends,” she realizes what she really was… a bully and a mean girl.  It is a life that she no longer wants for herself, especially when she starts to learn the truth about her own family.  I love the change in her life, going from the queen bee to being the outsider.  It is a good reminder to look beneath the surface and think of others.

This is a story about looking at life and priorities from a new perspective.  All of a sudden,  There are messages in this story that are important for all of us.  She realizes that she has been living a life to please everyone else instead of being true to herself.

Comprehension dawns, and all the blood leaves my head in a rush. I start to shake. No matter what question I ask, the answers all point in one horrifying direction. I have no idea who I am (Loc. 113-114).

“Sia, dear, can we please not discuss your homeless friends over lunch? I’m trying to eat (Loc 872).”

I feel increasingly sick listening to my so-called friends talk, their eyes dancing with malicious laughter. Was I really one of these people? Was I ever such a selfish, cruel person (Loc. 1310-1311)?

And now I know what to do with the rest of it. I have a lifetime ahead of me, one I hope to fill with as much love and joy as I can find. One I will fill with beautiful memories. Who am I? I’m Sia Holloway. And this is the me I was meant to be (Loc. 4207-4210).

A fantastically gorgeous story that I highly recommend to those who want their faith in humanity restored!

Josh Grayson was born in Mexico, raised in Massachusetts, and now lives in Martinsville, Virginia. It was his move to the South that stirred his imagination and gave him the courage to start writing. During his free time, Josh enjoys jogging, swimming, reading and dreaming up new stories.

Josh currently works as a medical driver, shuttling people all over Virginia and North Carolina. He has also worked as a machinist, film sales rep, admin. assistant, and telemarketer (he apologizes if he called you).