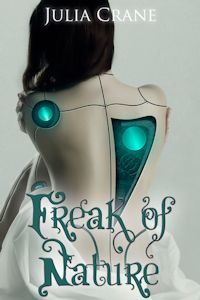 When seventeen-year-old Kaitlyn checked the box, she never suspected she’d have her life–and her body–stolen from her. She awakens one day in a secret laboratory to discover that her body is now half-robot and is forced to hide her own secret: that she still has human emotions and a human mind. If the scientists who made her find out, they’ll erase what remains of who she was.

Kaitlyn finds an unlikely ally in Lucas, a handsome, brilliant scientist who can’t get over the guilt he feels knowing she was once a vibrant, beautiful young woman. He never expected a science project to affect him the way she does. As he tries to help her rediscover her past, he finds himself falling for the brave girl struggling to find her place and acceptance between the human and computer worlds.

I am a big fan of Julia Crane’s writing.  There is a lovely flow to it and the characters are wonderful.  I read her Keeghan’s Chronicles series last summer and was mesmerized by her style of writing.   The world of the IFICS series is very different from that of Keeghan’s Chronicles, but no less engaging.  Where the other series brought the mystical magic and mythology of Ireland into the contemporary world, this series is full of futuristic technology hidden from the rest of the world.  I wasn’t sure what to expect from this book.  Not only is it very different from much of Julia’s other work, I had also read very little “cyborg” fiction.  There has just never been much appeal to me with this subject.  Honestly, it was the striking cover that brought me to it, along with the fact that I have enjoyed her writing immensely.

Half human, half robot… that is who, and what, Kaitlyn is now.  When she donated her body to science, she could never have anticipated what that would mean for her.  Part of the reason “cyborg” fiction has never appealed to me was the fact that I couldn’t see how a story could sustain itself without the emotion that is a part of humanity.  But Kaitlyn has more of her humanity intact that her handlers at the lab know about.  This makes for a fascinating character, as she struggles to find her place… human or machine.  She has been created to be a black ops weapon, something that terrifies her.  Lucas is one of the scientists that helped to create her and is the man who brings her to her humanity.  Although they are older than typical “first love” romantic heroes, there is something innocent about their love, mostly due to Kaitlyn’s lack of memories.  But there is no small amount of steamy attraction, too.  Quess, the granddaughter of one of the scientists, is Kaitlyn’s best friend.  Many times, although younger, she seems to act as Kaitlyn’s teacher and guardian.

Even aside from the romance, it is the intrigue and the intensity of the implications of the science that make this book so fascinating.  Even though Kaitlyn feels emotions, her understanding of what those feelings mean is gone.  She has to relearn all of those things that most of us take for granted.  The idea that the advancement of technology can, and sometimes does, take a place of higher value than does humanity.  This is a scary thought and one that is all too easy to imagine.  There is a darkness to this book that makes you think about some things, to question them.  I love that!

Half-human, half-machine. She didn’t quite fit into either world. I’m an abomination, she thought, her shoulders slumping (Loc. 18).

“How could you possibly think I’m beautiful? I’m repulsive—a freak of nature (Loc. 847).”

A fantastic read with a lot of depth and intensity!

Julia Crane is the author of the Coexist: Keegan’s Chronicles. She has a bachelors degree in criminal justice. Julia has believed in magical creatures since the day her grandmother first told her an Irish tale. Growing up her mother greatly encouraged reading and using your imagination. Although she’s spent most of her life on the US east coast, she currently lives in Dubai with her husband and three children.