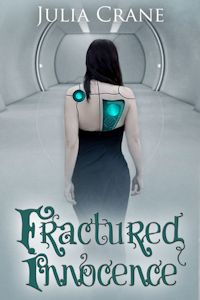 [color-box]Kaitlyn and Erik are sent on a mission to track down Vance Dasvoik, a ruthless monster. His latest thrill—abducting and selling young women.

Vance's current victim: Aaliyah, a seventeen-year-old who never imagined walking her brother home from school one evening would change her life forever.

The mission quickly turns personal for Kaitlyn when she finds Aaliyah beaten, her mind and soul fractured from abuse of the worst kind. Kaitlyn knows firsthand what it's like to be haunted by the past and resolves to bring justice to the elusive Dasvoik.[/color-box]

Fractured Innocence is the fantastic sequel in the IFICS series.  It is is sci-fi, dystopia, romance, and thriller all wrapped up in one cyborg package.  It is also a far darker and more intense read than was the first, Freak of Nature.  In this book, Kaitlyn has come into her own and living her new life in the best way that she can.  Her humanity and her creation to be a weapon have come together to make her what she is today… a black ops-style soldier on a mission of good.

The villain in this book is a bad guy of the worst kind.  He is the leader of a human sex trafficking ring who also dabbles in drugs and illegal weapons.  As much as the story is about Kaitlyn, it is also about Aaliyah, a girl stolen with her little brother off the streets of Detroit.  What this girl goes through in this book, and her fellow captives, fractures her soul and changes her irrevocably.  It is the mission of Kaitlyn and her partner Erik to take this leader down, and everyone with him so that the captive boys and girls can be rescued.

There was such depth of emotion in this book, something that is surprising when you  take into account the main character is a cyborg who had lost much of her humanity.  But we feel her pain and, more than that, we feel the pain of Aaliyah as she suffers through hell.  It is undeniably dark and intense and there are parts that truly touch the heart and shake you to the core.

There’d been a time in the not so distant past when she was lonely and ached for any human connection (Loc. 45).

Kaitlyn wanted Dasvoik to see exactly what was  coming for him. To see the fear in his eyes when he saw a half human raining hell down on him (Loc. 94).

The room seemed to grow smaller as the fear began to swallow her. She was not naive; she knew what he meant by breaking her in (Loc. 595).

And I am probably one of the weakest. She kept that thought to herself. Maybe if she continued to work with Kaitlyn, she, too, would one day be brave (Loc. 2888).

Julia Crane is the author of the Coexist: Keegan’s Chronicles. She has a bachelors degree in criminal justice. Julia has believed in magical creatures since the day her grandmother first told her an Irish tale. Growing up her mother greatly encouraged reading and using your imagination. Although she’s spent most of her life on the US east coast, she currently lives in Dubai with her husband and three children. 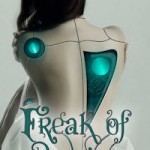