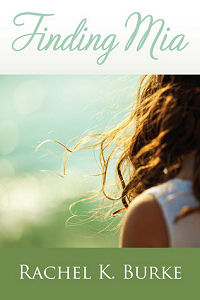 [color-box]Intelligent and fiercely independent, sixteen-year-old Mia Marchette has never had a childhood. After her father's disappearance when she was six, she has alone borne the burden of her mother's bipolar disorder.

When her mother is institutionalized after a failed suicide attempt, Mia is abruptly forced to live with the estranged father she has not known for ten years. She is shocked to discover that he has created a new, picture-perfect life for himself, and is now living with a stepmother and a half-sister Mia never knew she had. Together, Mia and her new family must face the bitterness, mistakes, and long-hidden secrets that threaten to destroy their precarious happiness.

Finding Mia follows Mia's journey as she searches to find the unanswered questions from her past, leading to her own self-discovery.

Ultimately, this is a story of confronting pain and finding freedom, of letting go and learning to search for love in unexpected places.[/color-box]

After reading the synopsis, I assumed that the story would focus on Mia’s struggles with her mother’s mental illness.  While that was definitely a part of the story, there was lot more to it.  There was also the struggle to relate to her father and his new family after spending most of her life estranged from him.  There was the struggle to find a place for her new stepmother in her life without feeling as if her own mother was being replaced.  There was also the struggle to love and support her boyfriend in his time of need and to know when it was time for her to let go.  And there was the story of finding love in the last place you expected to find it… in romance, in friendship, and in your family.

The story is predominantly told from Mia’s perspective, but also from her mother’s, as well as her father’s and her stepmother’s.  This creates a very well-rounded story as we learn about what is happening from different viewpoints.  This is definitely not a light story, but one that has some pretty intense emotions, situations, and moments.  There are some lighthearted moments, but there are some that can break your heart, too.  There are others that leave you frustrated and wanting to yell at these people in the book that you have become engrossed in!

The characters, too, can incite some pretty conflicting emotions.  Mia is a character that is easy to love.  Her new BFF, Gretchen, is also easy to love.  She was pretty and popular and could have been a Mean Girl, but was considerably deeper than that, with a story of her own.  Mia’s stepfather, however, was one that I alternately loved and hated.  It was hard to get beyond the fact that he abandoned Mia, but there is no question that he had reasons, even if they were misguided and perhaps selfish.  Suzanne, Mia’s stepmother, was wonderful and the growing relationship between Mia and Suzanne really added a lot to the story.  And then there was Evan… tragic, messed up, brilliant Evan.  That was story in itself.  But I think Josh, her childhood friend, was the true hero in this book for Mia!

There were some heavy topics, themes, and situations in this book and I think the author did an amazing job in addressing them.  It was written in a way that maybe educated a bit, but did it in a way that did not read as such.  There was no glossing over of reality and no glamorizing it either.  Instead, you had a story of real people, real situations, and all the messiness that goes along with all of that.

This is a fantastic story of love and loss, compassion and forgiveness.  It shows how mental illness and drug addiction can affect not only the person with the issue, but everyone around them.  A book that I highly recommend!

Rachel discovered she wanted to be a writer at the age of ten, when her love of R.L. Stine murder mystery novels inspired her to start writing her own.

In 2008, Rachel combined her love of writing and music and began freelancing for a music column in Worcester Magazine. She also worked as a music journalist for Starpulse News Entertainment and Jamsbio Magazine, as well as a fitness journalist for Prevention Magazine.

Rachel graduated from Bridgewater University in 2011 with a B.A. in Communications and Media Studies.