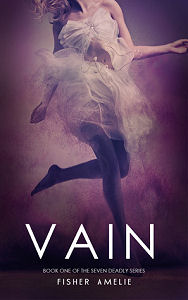 If you’re looking for a story about a good, humble girl, who’s been hurt by someone she thought she could trust, only to find out she’s not as vulnerable as she thought she was and discovers an empowering side of herself that falls in love with the guy who helps her find that self, blah, blah, blah...then you’re gonna’ hate my story.

Because mine is not the story you read every time you bend back the cover of the latest trend novel. It’s not the “I can do anything, now that I’ve found you/I’m misunderstood but one day you’ll find me irresistible because of it” tale. Why? Because, if I was being honest with you, I’m a complete witch. There’s nothing redeeming about me. I’m a friend using, drug abusing, sex addict from Los Angeles. I’m every girlfriend’s worst nightmare and every boy’s fantasy.

I’m Sophie Price...And this is the story about how I went from the world’s most envied girl to the girl no one wanted around and why I wouldn’t trade it for anything in the world.

Amazing.  Hands down, one of the most powerful books I have read.  I went into it not really knowing what to expect.  It is written from the first-person POV, in Sophie’s voice, and it follows her journey from spoiled, rich girl to a young woman with value… to herself and to others.

This book pulls no punches, softens no blows, glosses over no situations.  It is in your face with sex, with drugs, with manipulation.  In the beginning, Sophie is unapologetic for who she is.  Rich, manipulative, and a tease.  She uses drugs and doesn’t apologize for it.  She uses her friends and feels justified doing so.  She uses sex as a weapon, as a tool, and she doesn’t care.  She rules her world and everyone in it and assumes that is how it always will be.  She is not at all likable.

And her behavior catches up to her, landing her in trouble that her money and her family’s name can’t get her out of.  Instead, she is sentenced to six months in Masego, working at an orphanage that her family’s attorney supports in Uganda.  From the moment Sophie sets foot in Africa, she is in complete and utter culture shock.  Her journey, both with the children and other people at Masego and within herself, is truly amazing.

She is such a self-absorbed jerk at the beginning of the book that I couldn’t imagine feeling for her character.  But that changes as we know more of her story and her family.  Pembroke, her family’s attorney was one of my favorite characters in the entire book, the one person from her past that I think truly loved her for who and what she was, and who understood why she had come to be the way she was.  And I loved that she grew to recognize that and to appreciate it.

There is action in this book, a lot of it, but the true action is within Sophie.  There is romance, too, and that becomes a beautiful part of her transformative journey.  There is joy and there is heart break.  Everything about this book tugged at my soul and at my heart.  There is so much to be said about this beautiful book, but I want everyone to read it and experience for themselves! I think there are some powerful messages in it, messages about love, about acceptance, about looking beyond the surface, about priorities and value.

Fisher Amelie resides in the South with her kick ace husband slash soul mate. She earned her first ‘mama’ patch in 2009. She also lives with her Weim, ‘Jonah’, and her Beta, ‘Whale’. All these living creatures keep the belly of her life full, sometimes to the point of gluttony, but she doesn’t mind all that much because life isn’t worth living if it isn’t entertaining, right?

Fisher grew up writing. She secretly hid notebooks and notebooks of dribble in a large Tupperware storage container in her closet as a kid. She didn’t put two and two together until after college where it suddenly dawned on her, “Hey, I like writing”. She’s a bit dense. “No, I’m not.” “Yes, you are. Put down that Oreo, your butt can’t take any more.” “You’re rude.” “Yeah, yeah.” Anyway, she likes to write and has finally beaten her self-esteem into submission enough to allow herself to be scrutinized under the ‘other readers’ microscope. “No! No! Not a cover slip! Last time it gave me a ra….” (mumbling)