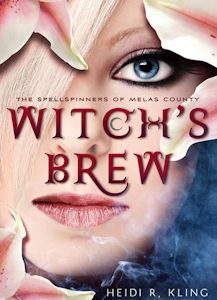 The Spellspinners of Melas County is a fantasy YA romance series about a witch, a warlock, and their fight for their forbidden but prophesied love.

Once soulmates, the witch and warlock covens of the California coast have been estranged for a century. Raised to hate each other, their teenagers meet in the Solstice Stones, a magical battleground where they draw energy from each other to maintain their balance. 16 year olds Logan and Lily have spent years training for their first Stones…only to discover just days before that the enemy may not be what either of them had thought.

In Witch’s Brew, Lily is torn between her feelings for Logan and her coven’s need to know who—or what—he is. The young lovers race against time, their distrust for each other, and the powerful influence of their elders to unravel the mystery of their pasts before their future is destroyed.

"Active fiction" is a new type of e-reading experience that allows the reader and the author to interact with each other and the text in new and different ways.

In Witch’s Brew, Lily and Logan's fate is already decided, but Heidi explores several different possible pathways for how they get there. She shares scenes that wouldn’t normally fit in a book format and gives readers more precious moments between the two young lovers. As the series progresses, you'll see some normal narrative forms, interspersed with smaller scenes, alternate points of view, and a lot of "what if" scenarios.

Witch’s Brew is the first book in The Spellspinners of Melas County series and is an “active fiction” read.  I have not read this kind of “choose your path” book before so it was a new experience for me.  There are two places at which you, as the reader, must make a choice.  The beginning and ending is the same, but the choices you make will affect how the characters get from point A to B.  I will be reading it again to follow some other paths to the end!

The book is set in a version of our own world, the geography recognizable.  But the world of magic exists alongside humanity, with most never knowing very much about its existence.  Witches and warlocks live separately, forbidden to interact with one another.  They live very different lives with very different values and priorities.  The story is told from the alternating points of view of Logan and Lily, a warlock and a witch.  I love that technique because it allows us to really know both sides of the same story.

Logan and Lily are fantastic characters with great voices.  Both have fully embraced the worlds they live in, ready and willing to accept anything and everything that comes along with that.  Right up until they meet one another and realize that there is something more going on between them.  There is a very clear line drawn between good and evil in this book, with Logan coming from the side of evil, but it is impossible not to love him for reasons that unfold over the course of the book.

The mythology is rich, drawing on some real principles, but with so many new elements of its own.  There is a lot of of mystery on both sides, secrets and betrayals and so much more.  The story grows more and more intense the farther into it you get and there is a fantastic cliffhanger waiting for you at the end…!

Sucking him in, I took a mental picture of his pale face, the almond shape of his eyes, the sharp outline of his jaw.  He was beyond hot.  Smoking hot.  Tree-caught-on-fire hot (Loc. 207).

This is a really great read!  There is a little of everything… love, mystery, intrigue, humor, magic!