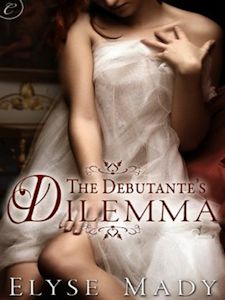 One woman in search of passion

Miss Cecilia Hastings has achieved what every young lady hopes for during her first London season...in duplicate! She's caught the eye of not one but two of England's most eligible bachelors. Both Jeremy Battersley, Earl of Henley, and Richard Huxley, Duke of Wexford, are handsome, wealthy and kind, the epitome of proper gentlemen. But Cecilia doesn't want proper, she wants passion. So she issues a challenge to her suitors: a kiss, so that she may choose between them.

Two men in love with the same woman

Friends since childhood, and compatriots on the battlefields of Spain, Jeremy and Richard have found that falling for the same woman has set them at odds and risks destroying their friendship forever. But a surprising invitation to a late-night garden tryst soon sets them on a course that neither of them could have anticipated. And these gentlemen quickly discover that love can take many forms...

The Debutante’s Dilemma is a historical romance set in 1800’s London, in the height of the Season.  It is a time of strict moral codes of behavior and the Cecilia Hastings is far more passionate than her prim and proper fellow debutantes.  Cecilia was a likeable character, and as relatable as a character from another century and society can be.  Her emotional struggle between her heart and the rules of society was well-written and well-developed, and drew me in as a reader.  While you knew from the beginning where the story was leading, getting there was still an enjoyable thing.  I did wonder how there was going to be a satisfying ending, as the story was leading to something other than what society at that time would have expected.  But the ending did answer the remaining questions satisfactorily, if a little rushed. There was a bit of an erotic turn to the story, but it didn’t overshadow the book and was not the primary focus of the story.

An enthusiastic and voracious reader of everything from 18th century novels to misplaced cereal boxes, Elyse has worked as a freelance magazine writer for the past several years.

Her first work of fiction, The Debutante’s Dilemma, was published by Carina Press in the fall of 2010. Her first contemporary romance, “Learning Curves” was published in June, 2011

In addition to her writing commitments, Elyse also teaches film and literature at a local community college. In her free time she enjoys (well, enjoys might be too strong a word – perhaps pursues with dogged determination would be better) never ending renovations on their century cottage with her intrepid husband and two boys.

With her excellent writerly imagination, she one day dreams of topping the NY Times Bestseller’s List and reclaiming her pre-kid body without the bother of either sit-ups or the denunciation of ice-cream.

One response to “The Debutante’s Dilema”