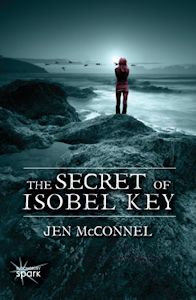 Lou is in the middle of a quarter-life crisis. Fresh out of college, she’s unemployed and unsure of herself. But when she gets the chance to escape to Scotland with her best friend, it could be the answer to her quest for self-discovery. The trip is not at all what she expected, especially when her tour guide turns out to be the dreamy historian Brian, and together they embark on a hunt for information about Isobel Key, a woman accused of witchcraft in the seventeenth century.

They set out to learn the truth of the condemned witch, but Lou isn’t prepared for the knowledge that awaits her. She must face her own demons if she has any hope of righting the wrongs of the past.

Flashing between seventeenth century Scotland and a contemporary romance, THE SECRET OF ISOBEL KEY is a mystery that will please readers of all ages.

This was a great book that hit just about every emotion on the scale!  Historical fiction isn’t generally one of my preferred genres, but this was really a blend of both historical and contemporary times.  Lou and Tammy head to Scotland for the holidays on what was a working trip for Tammy.  Lou is a bit of a mess, floundering in her life and unsure of where she is going. On a tour, Lou and Tammy meet a gorgeous Highlander named Brian, who inadvertantly changes Lou’s life.  It is by chance that she learns about Isobel and researches her story during the time of the Scottish witch trials.  It is then that her life truly changes.

I like a book that makes me feel, and Isobel Key definitely made me feel.  I loved Lou, although her sometimes “wishy washy” demeanor made me want to scream.  Tammy frequently annoyed me, as she was supposed to.  She reminded me so much of people I have known with her somewhat “holier than thou” attitude.  Lou’s adopted parents drove me insane, and reminded me a lot of Paige’s parents in The Vow, overbearing and controlling.  The point is whether you loved them or hated them, these characters drew you into the story.

This book really told the story of the witch trials in an interesting way and I enjoyed it from cover to cover!

Jen McConnel first began writing poetry as a child. Since then, her words have appeared in a variety of magazines and journals, including Sagewoman, PanGaia, and The Storyteller (where she won the people’s choice 3rd place award for her poem, “Luna”).

She is also a former reviewer for Voices of Youth Advocates (VOYA), and proud member of SCBWI, NCWN, and SCWW.

A Michigander by birth, she now lives and writes in the beautiful state of North Carolina. A graduate of Western Michigan University, she also holds a MS in Library Science from Clarion University of Pennsylvania. When she isn’t crafting worlds of fiction, she teaches college writing composition and yoga.

Once upon a time, she was a middle school teacher, a librarian, and a bookseller, but those are stories for another time.
– See more at: http://www.jenmcconnel.com/p/about-author.html#sthash.kw233bIB.dpuf