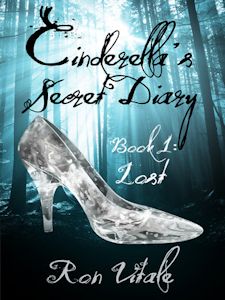 What happened to Cinderella after she married the Prince? Set in the late 1700's as Napoleon is rising to power, Cinderella embarks on a journey of self-discovery as she tries to come to terms with her failed marriage and her inability to have a child. Torn between the Queen's insistence that she try all means necessary to conceive and her own desires, she agrees to travel to Paris to consult with a witch to help her become pregnant. Her journey leads her to find her long lost Fairy Godmother and aids her to solve the mystery behind her mother's death. Yet the Lord of the Fairies, the Silver Fox, also takes notice in her and her world is suddenly turned upside down...

Lost was unlike anything I have read before.  It tells the story of Cinderella and the Fairy Godmother in a completely new and unexpected way.  It is told in diary format and was a creative way to tell the story.  Frankly, even though it deviates from the original, I liked it far better.  Tons more intrigue, mystery, fantasy, and romance.

The book pulled me and I couldn’t put me down.  The romance was so well-done and the voice of Cinderella was so perfect that it was hard to remember that it had been written by a man,  I also liked that there was a bit of a message in it, with Cinderella’s romance story.  That loving oneself is just as important as being loved by or loving another.  That added a bit of a journey to Cinderella’s diary that made it much more personal and made the diary-esque style that much deeper.

I highly recommend this read.  It was a refreshing take on a classic fairy tale character.  The second book, Stolen, is out now and I am going to be reading that, too!

Ron Vitale was born and raised in Philadelphia, Pennsylvania. Influenced by the likes of Tolkien, Margaret Atwood, C. S. Lewis, and Philip Pullman, he began writing at an early age, creating short fiction from his early Dungeons & Dragons role-playing sessions.

Currently, he is keeping himself busy by writing his blog, and on learning how to be a good father to his kids all while working on the next Cinderella’s Secret Diaries novel.