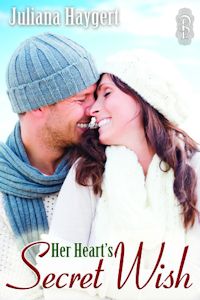 With a renowned reputation as a player, she had everything figured out...

Twenty-year-old college student, Natasha is the life of every party and the reason behind many celebrations. The easiest girl on campus has all guys at her feet and more than a few in her bed.

…until he came into the game…

Having entered the academic world by chance, Professor Jason Stone is surprised to find one of his young students a huge temptation. The infamous Natasha has caught his attention. But is there more to her than meets the eye?

…and changed the rules.

As their unexpected friendship grows, so does their attraction to each other. When Jason’s Christmas plans are canceled and he ends up at the same party as Natasha, sparks flare, destroying the safe zone around them. Will they figure out how to break through their self-imposed barriers to be together, or lose one another forever?

Her Heart’s Secret Wish is the debut novella from author Juliana Haygert, short, gritty, and totally engaging!  While loosely a “holiday” read, the holiday theme was an aside to the rest of the story.  With such a sweet cover, I thought I was going to be reading a sweet holiday story.  Don’t get me wrong… it was.  It just wasn’t sugar sweet and neatly tied with a bright red Christmas bow.  And that is exactly what I liked about it!  There was no sugar coating Natasha and making her be some pure, little angel.  Instead, she was raw, gritty, and self-admittedly a bit on the trampy side.  But, trampy or not, she was a girl with a heart and that is what made her character so likable.  The added bit of taboo with the relationship with her professor added a little more spice to the story, too!  It’s a sexy story, but not one that is all sex and no story.  It is definitely the story first and a fun story to read, complete with a bit of angst and humor and spice and everything nice!

An aside… I loved that there was a World of Warcraft reference in there, being a WoW girl myself!

I can’t wait to read more by this promising author!

While Juliana Haygert dreams of being Wonder Woman, Buffy, or a blood elf shadow priest, she settles for the less exciting—but equally gratifying—life of a wife, mother, and author. Thousands of miles away from her former home in Brazil, she now resides in Connecticut and spends her days writing about kick-ass heroines and the heroes who drive them crazy.