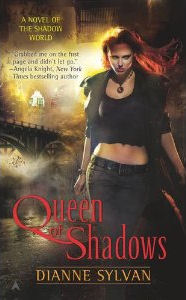 Spread throughout the dark corners of our world lies the Shadow World, a society of vampires that feeds off the living. In Austin, Texas, one woman’s madness will drive her into a world that few people ever see – or even know exists…

Shortly after she picked up a guitar, Miranda Grey conquered the Austin music scene with a newfound ability to psychically manipulate her audience’s emotions. But as her powers outgrow her control, her mind is increasingly invaded by haunting secrets and overwhelming sadness. Unable to look anyone in the eye, Miranda is fast approaching the edge of insanity – with no one to catch her fall…

When he outlawed killing humans, David Solomon ignited a civil war among Austin’s vampires. As Prime of the South, his sympathy for mortals angered the old guard who refuse to control their violent urges. David has his hands full with the growing insurgency, but he takes in a broken-down woman, a musician in need of supernatural guidance. Little does he know that Miranda Grey has the power to change his world as well…

Queen of Shadows is the first novel in Dianne Sylvan’s new Shadow World series.  Set in contemporary times in Austin, Texas, the story opens with the heroine, Miranda Grey, a tortured musician convinced that she is on the brink of insanity.  The recent onset of strong empathic abilities has left her overwhelmed and feeling isolated.  Seemingly overnight, her life has turned upside down.  In the midst of personal tragedy, she meets David Soloman, a computer geek,… and vampire Prime of the South.  Her world once again turns upside down.  He helps her heal from her tragedies, both physically and mentally, even helping her to get her empathic ability under control with the help of his Second, Faith.  She eventually goes back to her life in Austin as a musician, ready to face life with her head up once again.  But this is just the beginning of their story,…

I had read some of Sylvan’s nonfiction, so I purchased her debut fiction novel the day it was released for my Sony Reader!  The story drew me and ensnared me, which I is something I truly love in a book.  I like to be lost in a story, and this novel definately gave that to me.  The descriptions she used were vivid and made you feel as if you were there.  The characters were very well developed and that made them very real and very relatable to the reader.  There were some very dark and disturbing elements throughout the story that kept me guessing and fully involved.  Too many times, supporting characters are not as fully developed as the main characters, leaving the story seem somewhat unfinished.  This was most definately not the case here.  As I neared the end, I found myself avoiding it, just because I knew I wouldn’t put it down without finishing and I wanted to make it last as long as possible!

The second book, ShadowFlame, is due out July 26, 2011 from Ace Urban Fantasy.

Dianne Sylvan, author of the Shadow World novels (Queen of Shadows, Shadowflame, Shadow’s Fall, the forthcoming Of Shadow Born, and at least one more) as well as two books on NeoPagan spirituality (The Circle Within: Creating a Wiccan Spiritual Tradition and The Body Sacred), lives in Austin, Texas, the only sane part of the entire state.

She is an unabashed Mac enthusiast, a froofy iced coffee beverage addict, a chronic Twitterer, a seasoned snark professional, a Spiritual Nomad, a shameless Vampire Diaries (TV) fangirl, a happy herbivore, a bit of a moody Scorpio, a sock junkie, a slightly freaky tattooed postmodern hippie, a cupcake baker extraordinaire, and is prone to hyperbole as well as fits of profanity.

When she’s not glued to the internet or writing about vampires, she works in the veterinary clinic and volunteers as bio writing coordinator for the animal rescue organization Austin Pets Alive.

She lives with two neurotic cats, Stella and Owen.