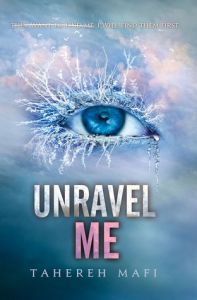 Juliette has escaped to Omega Point. It is a place for people like her—people with gifts—and it is also the headquarters of the rebel resistance.

She's finally free from The Reestablishment, free from their plan to use her as a weapon, and free to love Adam. But Juliette will never be free from her lethal touch.

Or from Warner, who wants Juliette more than she ever thought possible.

In this exhilarating sequel to Shatter Me, Juliette has to make life-changing decisions between what she wants and what she thinks is right. Decisions that might involve choosing between her heart—and Adam's life.

This series just keeps getting better and better and better.  All of the books have been deep and emotionally charged… and pretty emotionally disturbing when you think about the world that these characters live in.  But this one, in my opinion, took it to a whole new level.

Watching Juliette grow and change is so fascinating.  She was so devoid of human interaction that it left her more than a little socially awkward and emotionally damaged.  Seeing her experience the world, even in the state that it is, is rather refreshing.  But her story wasn’t all happiness.  Parts of it were just heartbreaking.  I wanted her to have everything she wanted.  She earned it, after a lifetime of being shunned, used, and treated like a monster.  But nothing in life, not even in fantasy, is perfect.

And we meet a new evil in this book.  Anderson, Warner’s father and the leader of the all-powerful Reestablishment.  He makes Warner look like a fluffy bunny rabbit, which is truly saying something.

Love dystopia?  Then run, don’t walk, and get these books!

« Destroy Me
Fracture Me »