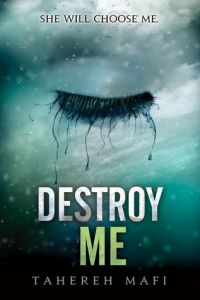 Perfect for the fans of Shatter Me who are desperately awaiting the release of Unravel Me, this novella-length digital original will bridge the gap between these two novels from the perspective of the villain we all love to hate, Warner, the ruthless leader of Sector 45.

In Tahereh Mafi’s Shatter Me, Juliette escaped from The Reestablishment by seducing Warner—and then putting a bullet in his shoulder. But as she’ll learn in Destroy Me, Warner is not that easy to get rid of. . .

Back at the base and recovering from his near-fatal wound, Warner must do everything in his power to keep his soldiers in check and suppress any mention of a rebellion in the sector. Still as obsessed with Juliette as ever, his first priority is to find her, bring her back, and dispose of Adam and Kenji, the two traitors who helped her escape. But when Warner’s father, The Supreme Commander of The Reestablishment, arrives to correct his son’s mistakes, it’s clear that he has much different plans for Juliette. Plans Warner simply cannot allow.

Set after Shatter Me and before its forthcoming sequel, Unravel Me,Destroy Me is a novella told from the perspective of Warner, the ruthless leader of Sector 45.

I truly did not want to like Warner, even a little bit, but I can’t lie.  Destroy Me ruined that for me.  I can’t help but feel for him now, no matter how much I didn’t want to.

He’s arrogant, more than a little disturbed, controlling, full of daddy issues, and a whole lot of screwed up.  He is also vulnerable and sweet and kind… things he shows to no one.  And the more we learn about Warner, the easier it becomes to understand him and the way he is.  Yes, he does some reprehensible things and it is often hard to see past those things.  But there are things about Warner that just make me want to hug him and love him.

Mafi creates such complex characters and I love that.  Juliette hovered on the brink of insanity for too long.  In many ways, that time stripped her of a lot of her humanity.  Her obsession with numbers and counting was a measure of control in an uncontrollable world for her.  To her, Warner was yet another measure of control over her.  Adam was everything that was freedom to her.  Warner was all of the things that she hated and was terrified of, and yet so much more than that.  Adam, too, was more than what he seemed, with a story and issues of his own.

If you love a fantastically disturbing dystopian story, this is the book (and series) for you!  It is so absorbing!

« Shatter Me
Unravel Me »